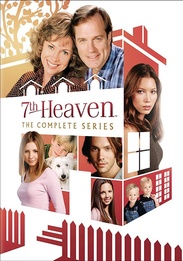 From leading television producer Aaron Spelling comes 7th Heaven, a critically acclaimed family drama about a minister, his wife and their seven children. The WB's highest-rated series, 7th Heaven has captured the hearts of television audiences with its witty, charming and heartwarming storytelling and has been praised for providing high-quality entertainment for all ages.