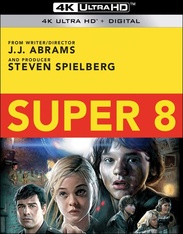 J.J. Abrams and Steven Spielberg join forces in this extraordinary tale of youth, mystery and adventure. Super 8 tells the story of six friends who witness a train wreck while making a super 8 movie, only to discover that something unimaginable escaped during the crash. They soon discover that the only thing more mysterious than what it is, is what it wants. Experience the film that critics rave is "filled with unstoppable imagination and visual effects to spare. It will put a spell on you."  Peter Travers, Rolling Stone

Rated PG-13 for intense sequences of sci-fi action and violence, language and some drug use.