The Disappearance of Alice Creed 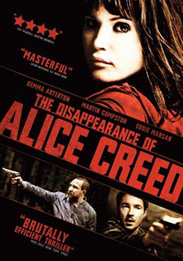 On a suburban street, two masked men seize a young woman. They bind and gag her and take her to an abandoned, soundproofed apartment. She is Alice Creed, daughter of a millionaire. Her kidnappers, the coldly efficient Vic and his young accomplice Danny, have worked out a meticulous plan. But Alice is not going to play the perfect victim- sheâs not giving in without a fight. In a tense power-play of greed, duplicity and survival we discover that sometimes disappearances can be deceptive.

Rated R for violent content, pervasive language and some sexuality/nudity.