Welcome to the Rileys 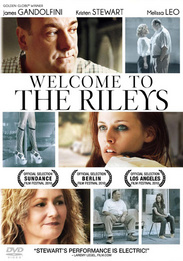 Golden GlobeÂ® winner James Gandolfini, (âThe Sopranosâ) is Doug Riley, a man at the crossroads. Ever since the tragic death of his teenage daughter, he's led a life of quiet desperation... and now, something has to give. On a business trip to New Orleans, he encounters Mallory (Kristen Stewart, the Twilight films) -- a raw, angry runaway living a dangerous life as a stripper. Moved by emotions he barely understands, Riley abandons his old life to save hers.

The tenuous balance is threatened when his wife Lois (Academy AwardÂ® nominee Melissa Leo, Best Actress, Frozen River, 2008) shakes off the fears that have kept her homebound for years. Now three lost souls seek hope and forgiveness in each other... and together, they discover a rare gift of connection that feels like family.