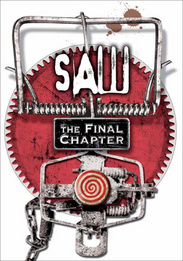 Witness the last diabolical act of a legend as the final pieces of Jigsaw's puzzles are revealed! As a deadly battle rages over Jigsaw's brutal legacy, a group of Jigsaw survivors gathers to seek the support of self-help guru and fellow survivor Bobby Dagen. But Dagen hides his own dark secrets, ones that will unleash a wave of unrelenting terror and suffering in this heart-stopping finale to the most successful horror movie series of all time.

Rated R for sequences of grisly bloody violence and torture, and language.