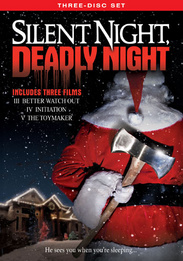 Prepare for a trilogy of pure terror with this collection of films from the SILENT NIGHT, DEADLY NIGHT series. In BETTER WATCH OUT!, it's a very bloody Christmas after Ricky Caldwell, the notorious "Killer Santa Claus," awakens from a six-year coma with one thing on his mind: murder. In INITIATION, a reporter's investigation into a mysterious death leads her into the clutches of a cult that's chosen her as its new queen, and THE TOY MAKER stars entertainment legend Mickey Rooney as a toy maker whose creations display some very human â and deadly â tendencies.