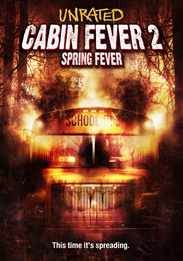 CABIN FEVER delivered terror in the flesh, but now your flesh will crawl with CABIN FEVER 2: SPRING FEVER, the bloodcurdling sequel to the hit horror film. Days after a killer virus consumed his friends, Paul emerges from a ditch by a river. Though his body has been ravaged by the virus, he is determined to survive and to warn others of the danger. However, a water bottling plant has already distributed contaminated water to the local high school. The school's students are excitedly preparing for the prom, unaware they're about to have a grisly date with death.