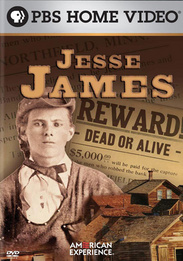 The story of Jesse James remains one of America's most cherished myths. Less heroic than brutal, James was a product of the Civil War - a Confederate partisan of expansive ambition, unbending politics, and surprising cunning - who gladly helped invent his own legend. A member of a vicious band of guerrillas during the war, James sought redemption after the conflict. But as this AMERICAN EXPERIENCE film reveals, year by year he rode further from it.