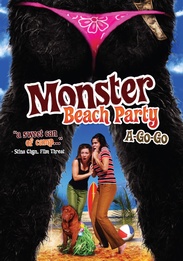 When the All-Girl Rock band, The Violas, tour van breaks down in a small mysterious southern beach community, all hell breaks loose! Stuck with no money, they accept a gig to play the towns annual beach party so they can fix their van and get the hell out of Jackville! But before they can escape, Bigfoot (yes, the immortal Bigfoot know in these there parts as the Skunk Ape) shows up and everything goes, pardon the pun, "ape" at the biggest beach party of the year! From Jay Edwards of Aqua Teen Colon Hunger Force comes this retro-cool beach blanket Babylon fun sized nugget of excellence!