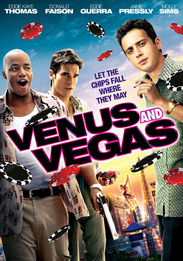 From the director of â3000 Miles From Gracelandâ comes Demian Lichtensteinâs new arresting and hilarious feature âVenus & Vegasâ. Three Las Vegas buddies stumble upon the score of a lifetime. They have to walk a fine line between the mobsters who want them dead, and their girlfriends who want their heads. The buddies quickly learn, whether its love or crime, you gotta be ready to do the time.