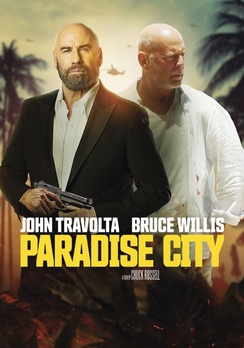 The last (and only) time we saw Bruce Willis onscreen with John Travolta, Bruce was filling John with lead as Pulp Fiction was reaching its crescendo. Ever since that moment, movie fans have been clamoring to get the two titans of action films together once more.

What should have been a slam dunk, home run, and whatever other sports metaphor you want to toss around is another wasted opportunity in the waning moments of Willis' career. Since his Aphasia diagnosis, as fans, we have been counting down to the end of Willis' acting resume with one disappointing movie after another.

Thanks to Bruce Willis' consummate chase for that elusive payday, he has no shortage of films in the can. Of course, no one knew about his condition when he was filming these movies and the quality shows that. Is it too much to ask for one last swan song vanity piece where we can remember Bruce for the Yippee Ki Yay badass mother(shut your mouth) that he was in his prime?

Movie icons and PULP FICTION costars Bruce Willis and John Travolta face off in this action-packed thriller. When bounty hunter Ian Swan (Willis) is shot and presumed dead after disappearing in Maui waters, Swan's son, Ryan (Blake Jenner), his ex-partner (Stephen Dorff), and a local detective (Praya Lundberg) set out to find his killers. After being threatened by a ruthless power broker (Travolta), it appears Ryan and his team are out of options â until an excursion to the closely guarded island community of Paradise City unites them with an unforeseen ally.

This should have been an easy layup (have I used all the sports metaphors yet?), but instead, director and writer Chuck Russell seemed less interested in making a classic 1990s action film and more determined to let Pardise City go off the rails with a flimsy storyline and the worse use of Hawaii as a setting since 50 First Dates.

I mean, I suppose it could have been worse had Adam Sandler shown up out of the blue. Or maybe it would have been better? Hard to really tell with this one.

That all being said, Pardise City is not completely terrible as most critics claim, but you really need to check your heightened expectations at the door. If you go in without any expectations or baggage hanging over your head, you will most likely enjoy Pardise City in that way that you secretly love Armageddon, but never admit in public.

Without getting into too many of the spoilers for the movie, let's just say that if you feel robbed by the first act expecting that big Willis/Travolta confrontation, just wait. Oh, and if you get to a point where you're totally expecting Nicolas Cage to trot on out, you're not the only one.

Pardise City shines its brightest when Willis and Travolta share the screen, but sadly the filmmakers don't exploit our desire to see them together enough for my liking. In fact, we get more of Blake Jenner than either of the two A-listers. Just a product of the times and quick paycheck I guess.

Despite the popular article circulating this week about Nepo Babies, Blake Jenner is not related to the former decathlete, nor does he have any connection to the Kardashians. Although, if he and Kendall ever hook up, I'm so there for the misplaced outrage and scorn from those unwilling or able to do a simple Google search.

Alas, Blake Jenner got his start on Glee and has been in a few things, but now he's apparently an action star. Well, that's what the filmmakers want you to think, but I'm not quite sure. I just found my attention waning any time he was onscreen and he wasn't just dwarfed by his more famous co-stars, he could barely carry scenes where it was just him and Praya Lundberg together.

The biggest bright spot for me was Stephen Dorff who seemed to be the only one to understand the assignment. As a rival bounty hunter and one of the reasons behind Ian's divorce from Ryan's mother, Dorff exudes the perfect amount of charm and ick that would win him a spot on Dog the Bounty Hunter's crew.

It's been a while since Stephen Dorff has been this enjoyable in a movie and for that reason alone, I'd recommend watching Pardise City. For all of the hype surrounding the reunion of Bruce Willis and John Travolta, it will Dorff's performance that will stand the test of time for me.

And really, that's all that matters. Pardise City is enjoyable and if you're a fan of action films, then you'll most likely find it passable. But, it's not the bar down slapper from the blue line that it could have been.

When you start with Willis and Travolta, the bar is set incredibly high whether that's fair or not. However, if you adjust your expectations, then you will find a lot to like about it.

Pardise City is now available on Blu-ray and DVD.