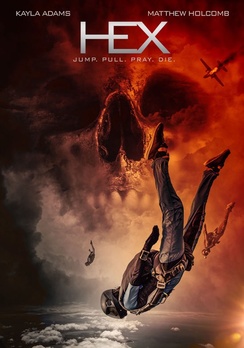 Nostalgia is all the rage these days. If it was cool 20, 30 or 40 years ago, then it's bound to be regurgitated into something today.

You can thank any number of current hits, but the obsession of the 1980s thanks to Stranger Things is probably the most likely culprit. Whatever the cause, it's no surprise that this latest fad is making its way into movie-making.

While some mainstream films, like X, pay tribute to the classic horror films that preceded it, others simply smash together some retread plots and locations and hope for the best.

While Hex doesn't quite fit the bill, I couldn't get over the sensation that I've seen this film a dozen times over in the late 1990s and early 2000s. To be fair, that was a weird period for horror films looking to transition from the slasher heyday of the 1980s and 1990s and the more sophisticated horror films of the 2010s. So, it's not surprising that some adventurous filmmakers would look to tap into this often overlooked era of horror.

Six extreme thrill-seekers get more excitement than they can handle in this intense, pulse-pounding action-horror tale. Loner Sarah joins a team of skydivers to help them execute a dangerous formation jump called "The Hex," ignoring warnings that the act may be cursed. While successfully performing the stunt, one of the jumpers vanishes into thin air. Later, as the survivors search for him, surreal and deadly events afflict each of them in turn â but will Sarah likewise succomb to the wrath of the Hex?

My daughter and I recently started a podcast where I'm introducing her to horror films and we talk about them. She's ten so it's a tough age to try and find age-appropriate scares that don't bore her to death. So, we tackle it head-on and watch all the classics. It's The Bad Dad Horror Podcast (you can find it here if it interests you. Ok, shameless plug over and time to get back to the review.

The point is that we've been watching and discovering a bunch of horror films lately, but we're trying to come at it from a historical perspective. I mean you can't watch Scream without first seeing Halloween or Friday the 13th among others. But one of the horror franchises that I'm looking forward to introducing her to in the future is the Final Destination series of films.

I have always thought that these films were clever and a rare bright spot in this "horror dead period." And when I watched Hex, these films were the ones that came to mind when looking for a close comparable movie. In terms of production value, it's like comparing apples and oranges, but thematically I really felt that these two films were spiritual relatives born a couple of decades apart.

That being said, Hex is really a mixed bag when it comes to providing entertainment value. On the one hand, I really enjoyed the skydiving footage as it's an area that is severely underrepresented in horror. You can tell that the filming was proficient in this area and the production went to great lengths to really capture this culture.

On the other hand, they probably should have spent more time on the development of the story and the acting. It's clear that 245088{Hex is a B-movie and, as such, your expectations should be lowered quite a bit, but man I was really hoping this one would defy those expectations and sadly it did not.

Once you get past the silliness of the plot, you realize that there are some interesting threads here that could have been pursued to tell a much better story. Alas, they didn't go that route and the film suffers greatly because of it.

That's not to say that you enjoy Hex, because if you liked Final Destination, there's a decent chance that you will be able to suspend your disbelief enough to make it to the end. Of course, you might not enjoy the ending, but that's a discussion for another day.

All in all, Hex is an ambitious film that is hurt by its extreme low budget that probably would have found a decent audience with a different budget from the mid-1990s. It's too bad that Doc Brown never got around to inventing that time machine... yet.

Hex is now available on DVD.