Review: 'Fall' will have you teetering on the edge of your seat 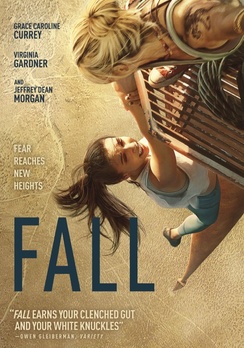 The main thrust behind Fall is so absurd that you have no choice but to simply buy in and see where it's headed. It's far from a perfect movie, but it perfectly keeps your attention for its 100-minute run time which is more than most films these days.

If you've seen the documentary Free Solo, channel all of that anxiety and prepare to have it reach new levels as Fall unspools. While knowing that climber Alex Honnold didn't die during the filming of Free Solo, you don't have that luxury during Fall.

In fact, the opening sequence results in the death of a climber who was using ropes and a safety harness, so all bets are most definitely off. Of course, it's this opening gambit that pushes all the action forward that I have the most issue with in the movie, but by the time the young women reach the tower, you learn to just accept it and turn your anxiety to what the next climb will entail.

For best friends Becky (Grace Caroline Currey) and Hunter (Virginia Gardner), life is all about conquering fears and pushing limits. But after they climb 2,000 feet to the top of a remote, abandoned radio tower, they find themselves stranded with no way down. Now Becky and Hunter's expert climbing skills will be put to the ultimate test as they desperately fight to survive the elements, a lack of supplies, and vertigo-inducing heights in this adrenaline-fueled thriller from the producers of 47 METERS DOWN.

My daughter is on a climbing team and she relishes the idea of climbing to soaring heights using only the muscles that you are born with. I, on the other hand, much prefer to stay grounded. It's not that I have a fear of heights per se, but rather that I have a great desire not to spend the last few moments of my life hurtling to the ground at 9.8 meters per second squared.

But hey, that's just me. A lot of people really enjoy climbing and I admire them for it, but I'm cool with watching from the ground with a nice cooler full of drinks.

My daughter had been bugging me for weeks to watch this film, so it was truly serendipitous that I was able to procure a review copy. We watched it together and while my reaction was much more reserved, she absolutely loved it.

I'm not sure if it's more her love of climbing and seeing it projected on the big screen or if she just loves thrillers (she recently has really gotten into horror films), but she bought into the story hook, line, and sinker. On the other hand, my biggest complaint is that if I lost my wife to a climbing accident, there's no way in H-E-Double-Hockey-Sticks that you're convincing me to climb an old rickety tower.

But then, you don't really have a movie, so I get it. With my suspension of disbelief firmly planted, I dove into the film and really enjoyed the tension and suspense that they were able to create. I think the biggest reason for this is that they really shot the film on location and didn't simply settle for digital effects and a safe sound stage.

As you can see above, while they were able to block out most of the action closer to level ground, they really were suspended 100 feet up a tower on the top of a mountain, so the fear in the two young ladies' eyes was definitely real. This fear translated onscreen to create the same unease in the audience and that's where Fall really shines.

I will say that there's an interesting twist or two that I wasn't expecting to be honest. For a film where 90% of the action takes place on top of a radio tower, there isn't really much room for in-depth storytelling, but the filmmakers found a way to make it more compelling and to help it rise above other similar films.

If you're looking for a comparable film, I'd point to Outback where a couple's survival is in jeopardy after they get lost in Australia's famous backcountry. However, I think they do more with less in Fall and ultimately it is the better film.

Fall is now available on Blu-ray and DVD.