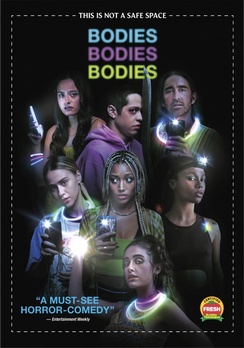 I'm sorry. Every time that I see this title, my mind immediately goes to one-hit wonder Drowning Pool and their iconic violent anthem, Bodies.

Actually, I'm surprised that this song isn't used more often during those frenzied slasher supercuts that have become a staple of modern horror films. I mean, it's pretty on the nose, right?

Oh well, it will live on as a missed opportunity as I searched high and low for the song in the movie and I came back empty-handed. But hey, if you're an aspiring horror filmmaker, consider this a free tip: somehow work this song into your climax.

When a group of rich 20-somethings gets stuck at a remote family mansion during a hurricane, a party game ends with a dead body on the ground and fingers pointed everywhere. As they try to find the killer among them, fake friends and real enemies have to learn who to trust â and how to survive â in this fresh and funny Gen-Z meltdown starring Pete Davidson, Amandla Stenberg, and Maria Bakalova.

"One, nothing wrong with me."

"Two, nothing wrong with me."

"Three, nothing wrong with me."

"Four, nothing wrong with me."

Great, now I've got that song stuck in my head. Of course, the lyrics do seem rather prescient for Bodies Bodies Bodies. The premise is rather simple, if not clichÃ©ed, at this point. A group of pretty twenty-somethings decides to barricade themselves in a mansion during a hurricane.

If there's a more Gen Z horror setup in the history of film, I don't know what it could be. The guests are your typical prosperous ingenues who were all born on third and honestly believe they got a triple. They have been given everything in life and their means have allowed them to build a false sense of security in life that will assuredly evaporate when, ahem, the first body hits the floor.

While Bodies Bodies Bodies could have followed the template established by stalwart 1980s horror staples such as April Fool's Day, the filmmakers opted for satirical criticism of the elite over the campy feel of its predecessors. For the most part, this decision is a wise one as Bodies Bodies Bodies comes off as both fresh and interesting instead of simply just another nostalgic burn through the horror-filled movies of our youth.

"One, something's got to give."

"Two, something's got to give."

"Three, something's got to give."

The something is the cast's false sense of bravado that melts away at the first sign of danger. Disregard for a minute that they all thought it would be a good idea to have a hurricane party in a mansion that could have probably survived the heaviest of shelling from World War II and the picture of these kids' insecurities begins to develop.

And yet, Bodies Bodies Bodies works as well as it does thanks to the stellar cast led by Lee Pace, Pete Davidson, and Amandla Stenberg. Maria Bakalova, fresh off her star-making turn in the Borat sequel, continues to show that her performance in that film wasn't a fluke. As the only real outsider to this group of trust-fund babies, Maria is the stand-in for the audience and continues to show the acting chops of a much more experienced actress.

With Pete Davidson's departure from SNL to pursue his acting aspirations, it will be interesting to see how his career will pan out. Most SNL veterans get typecast as comic relief for much bigger stars, but there's just something about Pete Davidson that seems to be different from his SNL pals. He is quickly building an impressive film resumÃ© with movies ticking off several different genres.

I never would have guessed that Pete Davidson would have the best chance for a mainstream acting career post-SNL, but here we are. Of course, it will be interesting to see how the public views him after his breakup with Kim Kardashian, but Pete was a white-hot ember before they started dating and if I were a betting man, I think Pete will be OK.

As I'm rediscovering the horror genre that I loved so much as a kid with my own daughter as she begins to discover these films, I have to say that Bodies Bodies Bodies is a wonderful nod to those films that came before as well as its own thing. While I love the Scream movies, horror-comedy isn't usually my cup of tea, but I was blown away by just how much Bodies Bodies Bodies is able to present its message for mass consumption.

And really, isn't that sort of the point?