Review: Much like its architecture stand-in, 'Mid-Century' is bold and interesting 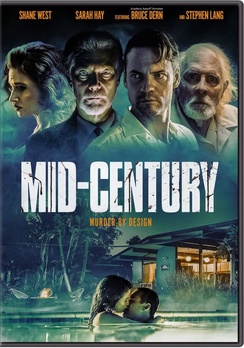 When you're talking architecture, the buzz words "bold" and "interesting" are universally regarded as a positive thing. For movies, it could go either way.

This holds true in this week's Mid-Century where the filmmakers try to thread an ambitious needle and mostly succeed. Of course, much like the architectural trend from which the movie takes its name, there is plenty of navel-gazing when all we want is an open concept design and enough bathrooms to support our aging urinary system.

Maybe we are watching too much HGTV on the weekends.

Academy Award-nominee Bruce Dern (NEBRASKA), Stephen Lang (AVATAR) and Shane West ("Gotham") highlight this stylish, intense horror-thriller. Looking for a change one weekend, ER doctor Alice and her husband, Tom, rent a glamorous mid-century modern home designed by architect Frederick Banner. As they investigate the home, they learn that Banner and his two wives died mysteriouslyâyet their spirits are very much alive. As they meet Banner's deranged son, they realize they must escape the home or succumb to its madness.

I want to make it clear that I give full marks to Sonja O'Hara and Mike Stern for crafting a very interesting story. Mid-Century is as ambitious as designers Charles and Ray Eames were in their heyday, and yet, when it's all supposed to come together, there's just something missing.

It's not as drastic as being the vital missing piece where the entire house of cards falls down, but it does leave a bit of a sour taste in the mouth of what was an otherwise enjoyable journey. And as they say, it's not always about the destination, but the journey to get there.

The strength of the film comes from the memorable performances from its leads. Stephen Lang and Bruce Dern are legends and they are at the top of their game in this one. But it's the turn by Shane West that really blew me away.

I've always had a hit-or-miss relationship with Shane West's performances. To be honest, I wasn't a really big fan of his until now, but as he's called upon to do the heavy lifting in the film, his performance is top-notch and dare I say one of the best of his career.

Again, Stephen Lang and Bruce Dern are great when they are on the screen, but I almost yearn to see more of them. Don't get me wrong, there's so much going on in such a compact running time that I'm not sure how they could have managed that, but I think the movie would have benefitted from more of those two.

Ultimately, I feel that the film mirrors the architectural concept it's named after. There's just so much going on, much of it unresolved as the credits roll, that you're not quite sure where to focus.

To make things even more challenging, there's a pretty big twist just over halfway through the movie that really throws the audience for a loop. For the most part, it makes sense, but like watching an Olympic gymnast who takes a step or two on their landing, you just know that there's a better version out there.

All of that said, the film is visually compelling and will certainly tickle your horror/suspense bones to the core. There is a lot that works and while your mileage may vary, I think you'll find it to be an enjoyable if not completely satisfying film.

If you're a completist who needs to have every last thread buttoned up before the film ends, then I'd sit this one out. Otherwise, I think that if you're looking for a stylish thriller, Mid-Century is worthy of a viewing.

Mid-Century is now available on Blu-ray and DVD.