Review: You will believe in 'Skinwalker Ranch' 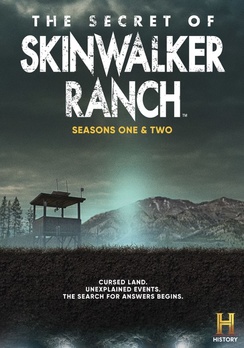 Much like last week's History's Greatest Mysteries, this week's The Secret of Skinwalker Ranch DVD packages two seasons on one DVD. Not only is this a great way to market the currently airing Season Three on the History Channel, but it's a value-packed way for new fans to catch up on the show.

So, what is the show? That's a really good question.

The TV series employs several Ancient Aliens veterans as they turn their sights on the mysterious Skinwalker Ranch, formerly known as Sherman Ranch, that has long been the epicenter of supposed alien activity and other supernatural occurrences in Utah. Are they real or simply a rouse by the former owners to stir up interest in the property ahead of a sale?

More importantly, is the TV series real or are they simply creating drama to sell the show? These answers are about as murky as the events surrounding the creation of this show itself.

For more than 200 years, Utah's Skinwalker Ranch has been the site of hundreds of unexplained paranormal and UFO-related activities, from strange animal deaths to possible gateways to other dimensions to UFO and poltergeist sightings. Using cutting-edge technology to document and investigate the 512-acre property, this groundbreaking nonfiction series provides a bold, unprecedented look inside the mysterious locale, as an accredited team of researchers, experts, and investigators dare to reveal THE SECRET OF SKINWALKER RANCH.

In 1996, Robert Bigelow and his National Institute for Discovery Science purchased the property for $200,000 and researched the property for twenty years before abandoning the effort. Officially, they claimed to have difficulty in obtaining scientifically verifiable evidence of the ranch's supernatural activity.

Unofficially, there are as many conspiracy theories as there are rocks on the ranch. In 2016, Bigelow sold the ranch to Adamantium Holdings, a shell company owned by Brandon Fugal for $4.5 million and things started to change.

Immediately, Adamantium Holdings applied and received a trademark for Skinwalker Ranch in the hopes of creating a TV series and selling merchandise and started to fortify the ranch against wandering members of the general public. What happened next is pretty much chronicled in the slick first two seasons of The Secret of Skinwalker Ranch.

I will give them and the History Channel credit. They certainly know their audience and do a superb job of leaning into them. As a fanatic part of this audience, I'm just happy to be entertained and if they are able to turn up some interesting facts, then all the better.

Not only do they have all the cool toys, but they've got a hidden bunker that rivals some of the best setups from the biggest budget action movies that Hollywood is churning out. Beyond that though, the investigators, led by Travis Taylor, seem to be genuinely engrossed in the mystery as much as those of us watching.

Much like their other highly-watched show The Curse of Oak Island, the History Channel is hoping that the gloss of the high production value will ultimately dazzle you enough to blind you to the fact that they really haven't found much. Sure, there are some strange things captured in the first two seasons, but none of it is the proverbial smoking gun that they are hoping to unearth.

But that's OK. Much like Oak Island, the journey is just as interesting and entertaining as the destination. Whatever they are eventually able to uncover will be interesting I'm sure, but it won't be the sole thing that the show is judged on.

No, the series stands on its own merits and makes for compelling viewing even if it's all a hoax. Actually, I'd be OK if, in the end, they reveal that it was all a hoax to goose the property value of the ranch. It might not be the spectacular ending that many hope for, but it will at least be real.

As it stands, it's hard for the viewer to know what is real and what is being manipulated for entertaining TV. Call me skeptical, but I'm leery about trusting the show's veracity to a bunch of people who bought the ranch simply to exploit its past for a successful TV series. Their motives might not be pure, but that doesn't mean that I don't want to believe.

Ever since paranormal TV has become a thing, we all want to see our wildest, craziest theories be proven correct. But, the reality is that most things that go bump in the night have a very real terrestrial explanation. It might not be the sexiest, but it's something that makes sense.

If that's what we've got here, then I will simply applaud them for creating a compelling TV series and move on to the next hopeful contender. I mean at some point, we've got to find proof, right? We true believers will never die and The Secret of Skinwalker Ranch will make you a believer.

The Secret of Skinwalker Ranch: Seasons One & Two is now available on DVD.