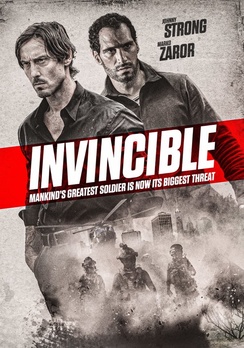 According to Merriam-Webster, the definition of Invincible is incapable of being conquered, overcome, or subdued. Let's just all agree that Invincible did not live up to its lofty aspirations.

That's not to say that Invincible is a bad movie - far from it - but I was left wanting more and I'm not really sure that what I did experience is something I would describe as being above subjugation. To be frank, it was a plus direct-to-video movie that should have seen the light of day a year or two ago.

The fact that this film sat on the shelf for the entire pandemic when studios were literally looking for anything with a heartbeat to release says all that you need to know about it. But if your favorite film is Universal Soldier and you have a soft spot for B-movies, then Invincible is right up your alley.

At a secret military site, injured soldier Brock is treated with advanced nanotechnology that turns him into an uncontrollable killing machine. Sent to stop the threat, security agent Cam is badly injured in a battle with Brock. To save his life, Cam must be implanted with the same technology that turned Brock psychotic and invincible. Will Cam gain the power to stop Brock, or will he become a lunatic menace himself? Intense hand-to-hand combat brings this stylish sci-fi action thriller to life.

To say that Invincible is an homage to Universal Soldier would be an homage, but it's impossible not to think of the earlier movie when watching the former. The gimmick is replaced with nanobots, but otherwise, the plots are nearly identical.

I feel for the filmmakers of Invincible because you can totally see that they were looking to capture that John Wick feel in an early '90s action vibe, but they just missed. Personally, I think it was the bizarre choice to simply use nanobots that was their biggest misstep.

Thanks to the gimmicky nature of nanobots when they were first introduced to movie audiences, there's just some leftover residue of taint when they are brought into a movie. This is weird because in real life nanobots have far surpassed most things that they have been tasked to do in the movies. And yet, the very notion of nanobots elicits chuckles and sneers from any avowed Science Fiction nut.

The hand-to-hand combat scenes between augmented leads Johnny Strong and Marko Zaror are fun enough, but the rest of the action is rather elementary. In particular, the gunfights (when they actually do happen on-screen) are rather lame and overly scripted.

That's the true secret to John Wick's success. Every aspect of those films is at the peak of their possible performance and it shows up in every frame of the movie. Here though, it's like they rehearsed each action scene once and prayed for the best.

Obviously, that's not how movies are made, but when you cavalierly choose improvisation over a well-scripted action sequence, the audience can tell. Not only that, but it starts to get them questioning other parts of the film, and, trust me, Invincible isn't one that will last long under close observation, especially when it comes to the plot.

Ultimately, Invincible shares many characteristics of the "better" movies released during the hard times of the pandemic. Had this film been released last year or late in 2020, it would have found a much more receptive audience. That audience would have probably been all too happy to forgive some of the film's shortcomings just to see something new and with copious amounts of action.

As it stands, the movie pales in comparison to its richer brethren out there back at it bringing in loads of money at the box office. There will always be an audience for these types of movies, but right now that audience is slim and shrinking with each passing day.

Invincible is now available on DVD.