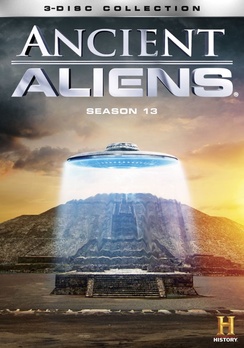 There is one thing that I don't like when I review a release from Ancient Aliens, trying to make sense of their numbering. The latest release out this week is given the moniker of "Season 13," but it does not contain any episodes from Season 13.

No, Ancient Aliens: Season 13 contains most of the episodes from Season 15 and a couple from the first half of Season 16. Most of them debuted on the History channel in 2020, but one of them first aired in February of 2021.

It's a cryptic puzzle that only the likes of Giorgio A. Tsoukalos and his ragtag gang of ancient astronaut theorists could unravel. I hate math and trying to divine their logic is beyond my comprehension.

What I do love about Ancient Aliens: Season 13 is that it gives me a chance to talk about one of my biggest TV show guilty pleasures and to reuse my gif of Giorgio A. Tsoukalos.

I will never get tired of seeing our collective alien buddy Giorgio and his fabulous hair.

Ancient Aliens: Season 13 has been given the following synopsis: Join Giorgio Tsoukalos and other ancient astronaut theorists as they continue their search for evidence of extraterrestrial contact in the distant past as well as the present. From Tibet, Chile, and the Mediterranean to the iconic UFO site of Roswell to the Pleiades star cluster, this season of ANCIENT ALIENSÂ® travels to the far reaches of the globe and beyond to delve into mankind's origins, mysterious government organizations, and the secrets of the universe â all in an effort to finally find out if we are in fact alone in the universe, or if extraterrestrial forces have been aiding and guiding us all along.

If it hasn't become clear by now, I have a soft spot in my heart for all things alien in nature. I may or may not have an encounter of my own from my childhood that I'm still trying to come to terms with, but it's just been an area of insight that has always intrigued me.

Are we alone in this universe? If not, are our celestial brethren peaceful or antagonistic?

Questions like this formed the basis for Ancient Aliens when it debuted in 2010. Eleven years and 16 seasons later (see, I'm not the only one bad at math), Giorgio A. Tsoukalos is both a meme and a household name and the History channel is now one of the most-watched networks on Cable.

Every time that I think that Ancient Aliens has reached its peak zenith, it comes back to life with even more preposterous episodes and I can't stop watching.

Like most of you, I started watching Ancient Aliens for the curiosity factor, but now like a train wreck, I can't turn away. Will aliens ever present themselves on the show? Will we ever storm Area 51? Will the government ever admit the truth about aliens? Will Giorgio A. Tsoukalos ever lose his glorious hair?

These questions continue to light the way, but I did notice a subtle change this season and you may have seen it above. It seems that there's a subtle shift away from using the term "ancient aliens" to "ancient astronauts."

The shift is a subtle one that most people probably wouldn't notice and if they did, would care even less. But, it strikes me as an interesting attempt at a rebranding for the series that continues to be a ratings bonanza for the cable network.

Thanks to Giorgio A. Tsoukalos and his meme-worthiness, the word aliens has almost taken on a level of absurdity for the show that continues to use the word in its title. And yet, as we have progressed these past couple of years, more and more research and evidence are surfacing to indicate that not only are aliens real, but they have been around us for a long time.

Suddenly, all of these preposterous theories that Giorgio and company spout out each week aren't necessarily so unbelievable. Maybe there are alien moon bases and ancient peoples interacted with aliens on a daily basis.

Of course, Giorgio's hair will always be outrageous and I'm beginning to think that he's more than half of the draw for me to the show. That's OK, I'm here for it all.

This "season" the topics range from the old favorites Roswell and the Men in Black to new interesting favorites. For me, standout episodes include "The Galactic Keyhole" and "The Divine Number."

Both of these episodes tread new ground for a series that is finding it increasingly difficult to stay fresh. I mean, we are on the cusp of 200 episodes now and how many ways can we recycle the same old stories from a new light or perspective?

Something tells me that if the ratings continue to hold, they will find a way. And I will be here for it, no matter what they call their ancient explorers or whatever bizarre numbering rubric they use. 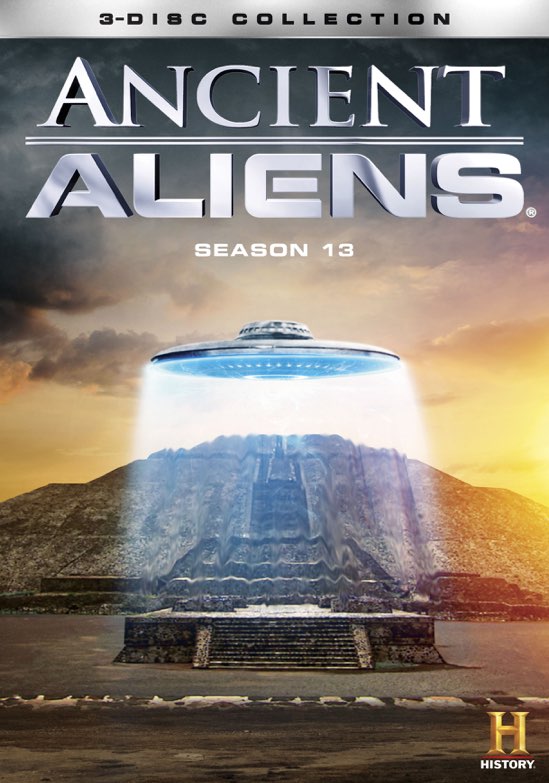