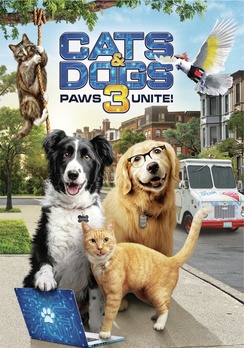 You could see the writing on the wall. Once the box office well dried up, studios would be forced to reach deep into their shelves to find anything that might connect with audiences.

Enter the quasi-sequels to existing properties.

Whether it's Welcome to Sudden Death or Deep Blue Sea 3, these long-shelved sequels were finally given a chance to shine. Naturally, there was a reason that these films required a global pandemic to see the light of day, but with little alternatives, these movies are finding an audience.

It's been so long since the first two films in the franchise were released that I can't really remember much about them other than dogs and cats put aside their differences to work together for peace in the animal world. Really, that's all you need to acquaint yourself with the subject matter ahead of Cats & Dogs 3: Paws Unite!.

In Cats & Dogs 3: Paws Unite!, a tech-savvy villainous parrot uses wireless networks to send a signal on a frequency only cats and dogs can hear with the intent of breaking up the Great Truce. Now the two immortal enemies are back fighting with one another and it's up to a couple of inexperienced agents to save the day.

The biggest tell on these types of films is that they are generically made with the hopes of being tagged a film in the franchise. It's entirely possible that Deep Blue Sea 3 or Cats & Dogs 3: Paws Unite! were simply created as independent films and then they shoehorned them into the respective franchises when needed.

Of course with Cats & Dogs, it nary impossible to tell because the earlier films in the franchise were so forgettable that you'd be hard-pressed to find anyone that could recount a cogent recap of the earlier films. I do recall that there was some James Bond innuendo with them even to the point of the pun Kitty Galore.

Of course, my life has taken a bit of a turn since the first to films came out. I now have two kids under 10 and suddenly I find myself in the target audience for Cats & Dogs 3: Paws Unite! So, after re-watching the first two films with them, we fired up the latest movie with gusto.

Upon revisitation, I found the original two films more enjoyable than I recalled which may or may not have something to do with finding myself with children now. Of course, the downside to this approach is that the disconnect between the earlier movies and Cats & Dogs 3: Paws Unite! is that much greater.

Not only is the new movie only tangentially related to the first ones, but the quality is much lower. My kids seemed to care less about the quality, but as parents, it will nag at you. This is definitely a film that caters to the under 10 set and doesn't really do much to connect with the adults that will be forced to watch it over and over again.

Thankfully, my kids have graduated beyond the watch things over and over again stage of entertainment for the most part, so I have been spared this torture for now. But if you find yourself with younger children, you might want to plan accordingly.

Overall, Cats & Dogs 3: Paws Unite! will find an audience mostly thanks to the lack of choices out in the marketplace. This is precisely the type of movie that would be forgotten in a week under normal circumstances, but there's a good chance that this movie will perform well in the coming weeks.

The one redeeming quality is that the Blu-ray is packed with extra goodies so if you have a child that is a fan, they will find hours of additional content to keep them entertained. Other than that, if you don't have young kids, there isn't much to see here.