Review: 'Ghost in the Shell' revels in 4K for its 25th anniversary 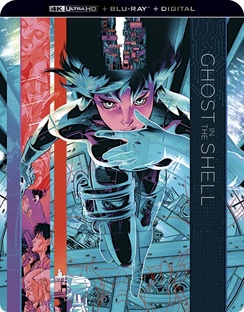 If you ask people what the game-changing anime film was, most of them will say Ghost in the Shell. It is not only a groundbreaking and landmark film, but it helped to usher in the wave of anime and manga on this side of the Pacific.

Even those who despise anime can't deny the societal and cultural impact of this genre and the importance of Ghost in the Shell in leading the charge. Without Ghost in the Shell, we don't get to The Matrix and so many classics in modern science fiction.

This is where I admit to a shortcoming. Until this review, I had not seen the original Ghost in the Shell and after seeing it, I'm ashamed that it has taken me 25 years to watch it. Its DNA is literally all over both film and TV from the last two decades and this 25th Anniversary 4K UHD release is the perfect excuse to correct a wrong or rediscover this classic film in all its HDR glory.

The film from 1995 was set in 2029 (isn't it a reminder of how old we are getting when movies set "far" in the future become the present?) and a female cybernetic agent is tasked with bringing a nefarious character known as "The Puppet Master." The antagonist is a mysterious computer virus that can infiltrate human hosts and make them do its bidding. Of course, there's more than meets the eye and the landmark film tackles such weighty issues as identity and the threat of technological advancement that rings even more true today as we reach a critical tipping point as a civilization.

First, I was shocked by how much of this film has seeped its way into popular culture. All of the subsequent films and TV projects that I love such as The Matrix, Ex Machina and Westworld can draw direct links to Ghost in the Shell.

It's not simply just another film, it's a cultural revolution that would go on to shape and define an industry to this day. And now, the generation that grew up with the film is reaching the point of becoming content creators themselves and they are taking the themes from the film to all-new heights.

In terms of the technical merits of 4K UHD, there's only so much that could be done with the source material. I don't even want to get into the debate of Ghost in the Shell vs. Ghost in the Shell 2.0, but there's a certain elegance to seeing it in its original presentation. To that end, the colors pop thanks to the HDR much more than the existing Blu-ray edition and there is less noise in the picture.

From the sound perspective, the new Dolby Atmos soundtrack for both the Japanese and English audio tracks are game-changers. I'm more of a subtitled person when it comes to foreign films, but the Dolby Atmos dubbed track with English speakers is just as enjoyable as the Japanese track. This will certainly help to make the film more accessible to those people who, for some reason, don't like subtitled films.

If you are looking for the definitive version of Ghost in the Shell, then look no further. Not only does the film look and sound better than ever before, but new bonus features seal the deal.

There are two new featurettes that provide a perspective of the film on its 25th Anniversary. Even diehard fans will find new information on the film and newbies like me will have an even greater appreciation of this important film.

All in all, Ghost in the Shell 4K UHD is a wonderful addition to any film lover's library. Not only is it an iconic film, but it's an experience that will continue to stand the test of time for another 25 years.