Review: 'We Bare Bears: The Movie' is a fitting end to a great series 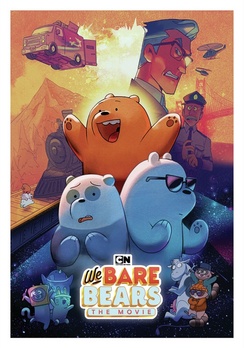 Having two children under the age of 10, I am constantly searching for entertainment options for them that are both age-appropriate and won't induce fits of despair in my wife and I. We recently discovered We Bare Bears and it's precisely what the doctor ordered.

The show ran for 140 episodes over four seasons and We Bare Bears: The Movie serves as a series finale for the popular TV show. Don't worry, there's supposedly a spin-off series in the works focusing on the bears as cubs that will undoubtedly be yet another hit with my kids.

In We Bare Bears: The Movie, the bears catch the attention of the National Wildlife Control when their latest attempt to go viral ends in abysmal failure. Now, the bears have been chased from their home and they are on the run to Canada - where freedom and maple syrup awaits. Along the way, the brothers learn about themselves and their connection to one another as they seek to fit into a society that has traditionally turned its back on them.

While the original series was entertaining, I always thought that it was rather scattershot. There is the one overriding arc of trying to find a home and fitting into the human world, but mostly the episodes are of the stand-alone variety. This approach works for the show and allows you to watch the show in a non-linear way that is conducive to today's cable network environment of broadcasting large chunks of episodes.

Shows like this don't usually translate to the big screen that well without some sort of bigger arc. There are exceptions of course, such as The Simpsons Movie and South Park, but there's a reason that these shows haven't enjoyed the sequel life. The fact is that they are more entertaining in bite-sized portions and that's OK.

At the end of the day, We Bare Bears: The Movie clocks in at just over an hour in length which suits the storyline perfectly. The film is a slight departure from the series that features the tried and true film clichÃ©, the road movie. The series is pretty well situated in the San Francisco area, so there's a novelty in taking the act on the road.

While on the road, the Bears come across other animal Internet sensations and the results are predictably hilarious. Just the idea of "Pizza Rat" being jealous and bitter of folks like "Dramatic Cow" and "Angry Cat" is comic gold and it pays off royally while also teaching the Bears a life lesson.

The best judge of this film though is its target audience, my kids. My son, who is 7-years-old, claimed that "this was the best movie ever." My 8-year-daughter, on the other hand, said that it was very good, but it had several sad moments.

I wouldn't say that We Bare Bears: The Movie has any more pathos than any other animated film these days, but it's rather an indication of how this property is stretching its legs. Any good film, whether it's a kids movie or otherwise, has to have some sort of dramatic peril to increase tension and keep the audience engaged.

To that end, We Bare Bears: The Movie is an engaging and heart-warming film that connects with both fans of the series and newbies alike. It's not only a satisfying end to a highly underrated series but also a bridge to those who are just now discovering its brilliance.

We Bare Bears: The Movie is now available on DVD.