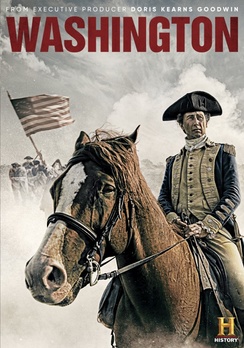 The myth of George Washington has grown so much over the last 200 years, that it's hard to remember that first and foremost, he was a flawed human being. Over the centuries, the legend has grown to the point where even the mention of his name conjures up patriotic images and the iconic portrait on the one-dollar bill.

With the wild success of Hamilton, people are discovering the father of our country in a new light and yet, his larger than life qualities persevere, no matter who is playing him. There is just a certain rarefied air of reverence that makes getting to know the man behind the legend difficult.

The new docu-drama miniseries from History provides as much humanity as legendary facts about our first Commander in Chief. Even in history books, the backstory of Washington is glossed over to focus on the portrait of our first President that we all know and love. But in Washington, a veritable who's who of historians and historical figures themselves give viewers an insight into the man behind the legendary persona.

The series starts about 20 years before the American Revolution when a young George Washington is fighting in the wild frontiers in modern-day Pennsylvania and Ohio for the British. It becomes readily apparent that this is the sanitized story that you've come to know by heart when the show graphically depicts a violent scalping by a Native American in front of Washington.

Before I reviewed this DVD, I contemplated watching it with my young kids so they could get a better understanding of the man that they've only come to know from money and school. After about 15 minutes, I'm glad that I decided against having them review it with me.

But in those opening moments, the series sets the ground rules and it's clear that this will be anything but a tame take on Washington. In fact, that sequence and the fallout highlights one of the man's biggest failures and sets a standard upon which all of his future actions are judged.

History has a great track record for these docu-dramas and Washington is the latest example of the effectiveness of this type of storytelling. Not only are you getting information on par with the best documentaries, but the actors reenacting the past are top-notch and help to bring the more dramatic moments to life.

One of the most compelling arguments made in the opening tome of the series is the fact that Washington craved a commission in the British army as a young man. At every turn though, Great Britain dismissed Washington and in doing so, they created their own worst enemy. If you think about it, there's a bit of comic book hero origin story to Washington's early career which makes the story that much more remarkable.

Not only does this humanize Washington, but later on in the series, they are able to use this to draw a parallel with Benedict Arnold. In much the same way that Washington craved acceptance and responsibility from Great Britain, Arnold was seeking that from Washington and the new revolutionaries.

When taken in retrospect, it's funny how a few small decisions compounded to create the fabric of a new country. History really is a living document in which we are constantly learning more about our Past. Washington is the latest example of how we are able to better understand our present and future by getting a more intimate knowledge of our past.

Washington is now available on DVD.