Review: Your heart will race while watching 'Outback' 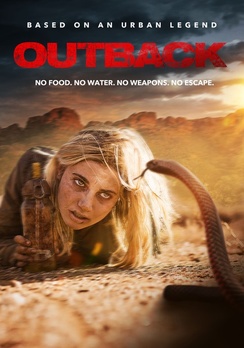 I have to admit that my knowledge of Australia is pretty limited. I know that it was first populated as a penal colony, "a dingo ate my baby" and The Outback is a pretty decent steakhouse with a tasty bloomin' onion appetizer. Yeah, I'm basically your typical naive American.

But this week's new film Outback will teach all of us naive Americans that the great Australian arid land that composes a vast majority of the island nation is not a trifle to be reckoned with. No, you'll definitely not make another "shrimp on the barbie" or "this is a knife" joke after watching this film.

Two young lovers take a dream vacation to Australia in the hopes of taking their relationship to the next level while making once-in-a-lifetime memories. When they take an unplanned detour into the dangerous and remote Outback, their trip becomes a matter of life and death.

There's been a bit of an uptick in survival thriller films lately and I'm convinced that most of the interest stems from the inherent level of anxiety and tension that these stories induce. Arctic, The Shallows and Gravity are wonderful examples of the will to live percolating to the surface in even the most unforgiving of locales.

The one way to ratchet up the intensity another notch is to introduce the element of a true story. Open Water is one such movie that tugs on the viewers' emotions all the more because that tragedy really happened. Or, at least a version of those events happened. I won't get into splitting hair about based on true events and the poetic license in taking an already horrible situation and making it dramatically worse.

I had never heard of the story that provides the launching point for Outback, but it's one that is easily believable. So, if there is a blurring between reality and fiction, it's forgivable. It didn't take much effort to find many stories of tourists getting lost in the Outback and ultimately losing their lives for their wanderlust.

The same fear factor that propelled Hostel into an undeniable smash horror subgenre is on full display here. Outback prays on the unknown of traveling abroad. While I've traveled abroad myself several times, I would be lying if I said that each trip wasn't filled with a certain level of trepidation.

That and did I mention snakes? The Australian Outback is filled with death at every turn and each one is nastier than the last one. That's one thing that Outback shines at as they don't mess around with showing wild dogs, snakes and scorpions and yet, it's almost what you don't see that is even more troubling.

Outback is now available on DVD.