Review: 'Think Like a Dog' is all bark, full of laughs 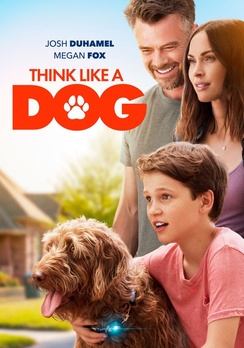 In today's climate, it's easy to get swept up in nostalgia for simpler times. Watching Think Like a Dog will instantly transport you to the late 1990s when movies were a bit more basic but still as entertaining.

One very unfortunate by-product of the Covid-19 pandemic is the impact on the release slate for home entertainment. Usually, the summer months are prime time for family-fare at the megaplexes that offer a respite from the sweltering heat. With the movie theaters closed, the home entertainment slate for kids has been rather lacking with the exception of a few digital exceptions.

Oliver is a 12-year-old tech prodigy who is working on a ground-breaking science fair project. When his experiment goes awry and he develops the ability to communicate with his dog, he unwittingly puts his family in the path of some ruthless people who will do anything to exploit this new discovery.

Let's face it. Think Like a Dog isn't for everyone and that's OK. It's squarely targeted at the family market and it's a direct hit to the funny bone for kids under the age of 10. As the parent of two such kids, it was refreshing to finally get a chance to review a film and get their honest reactions.

For adults, it's easy to scoff and imagine that this film is simply a ripoff of films from our youth, but kids don't know that. They haven't seen any version of The Shaggy Dog (maybe I need to rectify that?), so they aren't as jaded. They went into the movie with pure hearts and they simply loved Think Like a Dog.

My kids enjoyed the slight elements of peril and couldn't contain their bouts of hysterical laughter when the dogs came to the rescue. There is a current of underlying familial strife that does an admirable job of making the film more relatable for our current status quo of proliferating single-parent households.

It was interesting to see a bit of a Transformers reunion between Josh Duhamel and Megan Fox. As Oliver's parents, they were an interesting pairing to help box in the plot a bit and provide a bit of comic relief. But make no mistake, the real stars of the show were covered in fur.

If you don't have kids, it's hard to explain just how much impact films like Think Like a Dog have upon a child's imagination. At the right age, they thrive in that space between childlike innocence and the reality of adulthood. With so many horrible things being presented to them 24 hours a day right now, it's even more important to have an escape where things are a bit less dangerous.

Thanfully, the filmmakers kept the tone light-hearted and while the older audience might think the toilet humor is a bit unsettling, the kids ate it right up. Our family thoroughly enjoyed our 90 minutes of escapism and it allowed us the opportunity to share more family-friendly fare from our past with them.

The result is that we were rewarded with much-needed family time where we could relax and simply enjoy the entertainment in front of us. Will Think Like a Dog ever win any awards? Probably not, and that's OK. This film was made for a particular audience and that audience absolutely adored it.

Think Like a Dog is now available on Blu-ray and DVD.