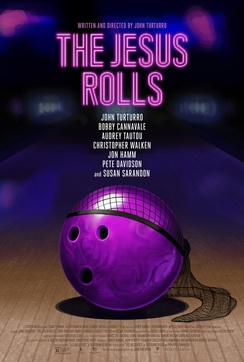 The Big Lebowski is one of the biggest cult films ever created. Heck, they have an annual celebration of the Coen Brothers' film in Louisville, Kentucky, so it's kind of a big deal.

It's impossible to say what precisely causes a film to film to rise up to cult status, but most likely it's a combination of things and perfect timing. I doubt we'll ever truly know what goes into the special sauce of a cult hit, but it's sort of like that old saying, "I know it when I see it."

Whether it's pornography or movies that capture the cultural zeitgeist, it's not easy to define, but we know it when we see it. The Big Lebowski is definitely one. The Jesus Rolls? Well, the jury is still out on this one, but even if it fails to reach the stratospheric level of cult hit of its predecessor, it is still an entertaining film that will make you pant for a long overdue update on The Dude and friends.

Jesus Quintana is released from prison and is reunited with fellow underachiever Petey and the pair embarks on an epic journey. Trying to stay one step ahead of the law, Jesus and Petey come across a menagerie of colorful characters that either help them on their way or just get in the way of their good time.

Right from the start, I must warn you that if you go in expecting The Big Lebowski Part 2, you will be disappointed. I would wager that the biggest reason that we haven't gotten a true sequel yet is the crushing expectations that would come with this movie. And yet, there are still worthy tales to be told.

The magnificent beauty of The Big Lebowski is the wonderful congruence of wacky characters. While we only get a small glimpse into their lives, it's readily apparent that there's much more to tell about Walter, Donny and, of course, Jesus.

So, if you go into The Jesus Rolls with reasonable expectations, you will find an interesting and entertaining journey into the psyche of Jesus Quintana. Learning that Jesus landed himself in prison isn't all that surprising, but one of the more outlandish strikes against him will surely raise your eyebrows.

From the get-go, we know what to expect and the rest of the journey does not disappoint. I was particularly impressed with the fluidity of Jesus' sexuality and his rather open no clothes necessary policy. The journey that he and Petey are on is more than just a fun romp, it represents a true deep bond between friends who are comfortable to share everything.

Another thing that is apparent is just how much John Turturro loves the Jesus Quintana character. He not only wrote the screenplay, but he also directed his script and The Jesus Rolls is dripping with Turturro's passion.

The Jesus Rolls is far from perfect (remember lower your expectations), but it hits more than it misses and that's really more than enough for this passion project. Fans of The Big Lebowski will enjoy the further exploits of one of their favorite characters. But, The Jesus Rolls really just whets their appetite for what my come. Will there be other spinoffs? Only time will tell...

The Jesus Rolls is now available on Blu-ray and DVD.