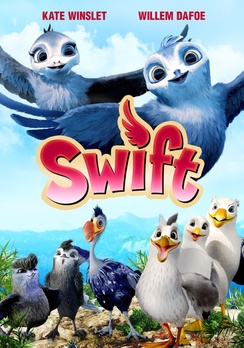 If you're like me, you've been practicing a fair amount of social distancing these days and there's just so many times that you can run through the Star Wars franchise. If you also have kids like I do, you know that these problem are exasperated by a child's inherent short attention span.

It's been a couple of weeks and the kids have soundly run out of entertainment options that don't involve some crazy whack-a-doodle on YouTube screaming at the audience about some sort of imaginary world. Is it too much to ask for the kids to be entertained and learn something without knowing it?

The animated film has gone through a bunch of names such as Birds of a Feather and Manou the Swift before settling on its one-word moniker and it simply fits. What also fits is the timing of its release. I'm sure Shout! Kids Factory couldn't have predicted the pandemic that is pillaging the world right now, but the result is that we've been cooped (no pun intended) with our kids for too long and we need something to help keep them entertained, even if it's only for 90 minutes.

Swift is a familiar animation story that is ultimately a twist on the ugly duckling tale. A young bird, Manou, grows up thinking that he is a seagull like his parents, but his world is turned upside down when he learns that he is really a swift. The seagulls and swifts don't exactly get along and soon Manou finds himself in the middle of a war between his true kind and the family that raised him as one of their own.

If the voices from the trailer sound familiar, that's because Manou's parents are played by the always wonderful Kate Winslet and Willem Dafoe. They really give the film a firm anchor of legitimacy that is sometimes hard to obtain if the animated movie isn't from Disney, Dreamworks or any of the major animation houses.

While their involvement helps to sell the movie when you put their names at the top of the box art, Swift is a film that can soar all on its own. Set in a nondescript French Riviera town, the movie is as visually stunning as it is topical. The advancements in CGI are really starting to pay dividends in smaller projects such as Swift. It has leveled the playing field and now the filmmakers can spend time on the important things such as plot and character development.

Manou is a relatable character as the prototypical "fish-out-of-water" that is trying to find out where he fits in. After being shunned by the only community that he has known, he discovers that while he may not be physically able to soar at being a seagull, he has other strengths that are just as important and, ultimately, come in handy at a critical juncture.

Beyond the typical coming-of-age clichÃ©s, Swift elevates its storytelling by introducing several notions that are applicable to every day life with humans as it is in different flocks of birds. My kids were entertained, but they were also learning that just because someone is different than you, doesn't make them any less important in the grand scheme of things.

The film also takes a firm stance against bullying. While they don't dwell on it too much in the movie, it is a very poignant teachable moment to share with my kids. At 6 and 8, they are in the critical period of school bullying and it was refreshing to be able to broach this delicate subject with such ease.

Ultimately, there are certainly flaws with Swift, but if the movie teaches us anything, it's that one species' flaw is another species' strength. I'm not sure what that means or how it relates, but I can understand how adults would simply dismiss this movie as just another low-rent animation film, but that would be their loss.

In the end, Swift proves that a compelling and educational story can be told in an entertaining way. As a parent of two lively children stuck at home in search of the next big thing, I was relieved to put this film in and share the story with them. It was high-quality entertainment and both of my kids were smiling when the movie ended.

In today's new normal, there's no higher praise than that.

Swift is now available on Blu-ray and DVD.