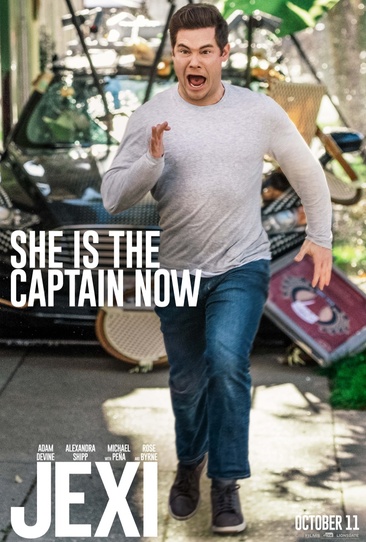 Everyone has a smartphone these days. Technology has gotten us the point that we are pretty much enslaved to the device that is technically called a phone, but people rarely make phone calls on it.

Seen as a satirical take on the wonderful film Her, Jexi proves that perhaps too much technology is a bad thing. In other words, Jexi is the worthless flip phone to Her's latest and greatest technological achievement and it's not even close.

A lovable loser type, played by Adam DeVine, finds that his obsession with his phone is ruining his life, both socially and professionally. When he gets a new phone and opts to turn over his decisions to a badass A.I. life coach, his life is turned upside down, but it comes with a catch. Jexi, the aforementioned A.I., becomes obsessed with her new owner and vows to make him hers at any cost.

I have to admit that when Adam DeVine came onto the scene, I wasn't a big fan. I was instantly turned off by his abrasive style of comedy and just didn't think he was that funny. Like a good fungus though, Adam grows on you and I quickly changed my tune about the young actor.

So, it was with a relatively decent amount of anticipation that I popped in the Blu-ray of Jexi for a review. My anticipation quickly faded and I started to question my budding appreciation of DeVine. To answer your unasked question, yes there is such a thing as too much Adam DeVine.

Given that the film requires a great deal of acting with an inanimate object, Adam DeVine seems like a pretty inspired choice for the lead, but it's quickly apparent that Jexi doesn't work. What should have been another breakout role for the young actor turned into a lateral step at best and a step back at worst for a career that is really at a crucial crossroads.

The odd thing is that I can't really place my finger on what doesn't work here. Back in the day, this would have been a vehicle for a young Jim Carrey and he would have nailed it out of the park, but such a comparison is unfair to Adam DeVine. While he's incredibly talented, Jim Carrey is a whole other level of special when it comes to comedic acting and no one would be able to replicate his level of brilliance.

The strong supporting cast including Michael Pena, Wanda Sykes and Rose Byrne (as the voice of Jexi) is on its game and Byrne's neurotic portrayal of an A.I. off its microchip almost saves the film, but there's something missing. While Her included a lot of humanity despite being a film mostly about a digital character, there is much less so found in Jexi.

As such, it doesn't really work as comedic pathos and fails to rise up to the level where it could even be seen as a warning about the rise of the machines. No, Jexi just repeatedly misses its mark and despite the cast's best efforts, there's very little here for the audience to root for. Worse yet, there's not many laughs and that's a death knell for a film like this.

Jexi is now available of Blu-ray and DVD.