Review: 'Lucky Day' is as quirky as Crispin Glover 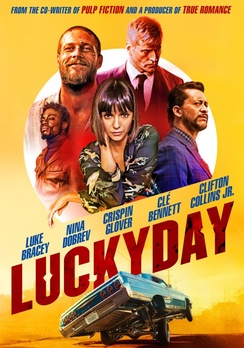 Is there anyone working in Hollywood these days as amazing and quirky as Crispin Glover? His range is seemingly limitless, but he's always extra special in those bizarre roles that we just couldn't imagine anyone else playing it.

Safecracker Red is released from prison after a two-year stint and all he wants to do is be reunited with his family and get an opportunity to go straight. Things don't quite go to plan though when a maniacal French hitman comes to town seeking revenge and leaving a body count a mile wide behind him.

Roger Avary is an interesting cat. His biggest claim to fame is his early collaboration with Quentin Tarantino that culminated in an Oscar for his writing contributions on Pulp Fiction. Since then, the former writing partners have forged their separate paths, but you can see each other's influence on their work.

While Avary has been focusing on other efforts for the better part of the last decade, he returns to roots as the writer and director of Lucky Day. The results are decidedly mixed as you can see the filmmaker trying to force certain cool aspects from his earlier works into this movie with mixed results.

Violence is certainly something that is a calling card for Avary and if you're looking for a bit of black humor in your killing sprees, then Lucky Day might just be what you're looking for. Unfortunately, the witty banter and quips seem less natural than they were back in the day and the overall result is something a bit uneven that had me reaching to put Pulp Fiction back in for another viewing.

If you're looking for a film that naturally evolves from the Pulp Fiction ethos, then I would recommend watching Free Form. It has all the gratuitous violence that you can handle as well as pacing and a script that is significantly better than Lucky Day. But that's not to say that the movie is without its merits.

The biggest asset for Lucky Day is none other than the aforementioned Crispin Glover. He instantly makes any movie better when he shows up and this film is no exception. His special brand of ruthlessness and quirky behavior creates an iconic character that is equally menacing as he is unintentionally funny.

In fact, I would love to see a spinoff prequel moving focused on hitman Luc and I can't be alone on this. Here, he has a singular mission, but it is hinted at in various places that there is an underlying component to his character that might be fun to flesh out someday.

Clifton Collins Jr. is another actor that turns in a fine performance in Lucky Day. As Red's parole officer, he is a ramrod stickler for the rules caught up in a word with very dark shades of gray. He is perfectly cast in this role and it's always a pleasure to see him work. I was a Johnny-Come-Lately on Clifton when he caught my eye on Westworld and I have enjoyed going back and watching his earlier work that I might have missed or overlooked previously.

Still, despite the valiant efforts of those in front of the camera, the sabbatical taken by Roger Avary shows up more than you would like. He's a bit rusty and Lucky Day comes off as an uninspired Pulp Fiction that takes way too long to kick it into high gear. Once they do though, it really clicks and is quite entertaining.

Lucky Day is now available on DVD and Blu-ray.