Review: 'The Cotton Club' gets all dolled up for its Encore 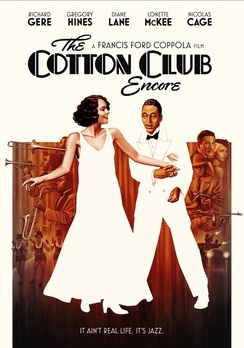 What do they say about fine wine? It gets better as it ages?

Well, I don't know if the same can be said for movies, but time and a little love from the director can certainly improve upon the original. Case in point, this week's release The Cotton Club Encore.

Director Francis Ford Coppola allegedly found a Betamax version of his original, longer director's cut of the 1984 film a few years ago and he was determined to finally bring his complete vision to life. Upon its initial release The Cotton Club was well-received and even earned two Oscar nominations, but to be frank, this was no Godfather.

The story goes that the film's original distributors pleaded with Coppola to make cuts to the film in order to market a shorter running time with more showings per day. These cuts savagely butchered the story and anyone who has seen the original version can tell you that while the film is certainly a visual spectacle, the story gets lost in the details and the overall movie isn't up to Francis Ford Coppola's usual high standards.

Set in 1930s Harlem, entertainers and gangsters collide in the legendary Cotton Club nightclub. Rivals gangs and a budding musician provide plenty of drama while musicians and dancers seek their ticket to bigger and better things.

I have to admit that usually, I'm very skeptical when it comes to vanity projects or filmmakers returning back to their films to make endless edits. "Maclunkey" anyone? But, I do think there is value in going back and righting an injustice and this is certainly the case with The Cotton Club.

I was 10 when the film debuted in theaters, so I can't really add much in terms of practical first-hand knowledge about the movie's release, but meddling studios is a tale as old as time. I discovered The Cotton Club in the late '90s when I was going through my Nic Cage phase. Hey, everyone was going through a Nic Cage phase back then, so don't judge me too harshly.

My initial thoughts on the movie is that is was good with a spectacular cast, but it just seemed to be aiming for something just out of its reach. Back then, I didn't read up on the circumstances of its release and simply chalked it up to Francis Ford Coppola trying to make a buck with something a little Godfather-lite.

I am happy to report that upon watching this newly restored and expanded version of The Cotton Club, the movie really jives. Most of the plot-related issues have been course-corrected and the added musical sequences are like finding a time capsule full of Mickey Mantle rookie baseball cards.

Featuring legendary performances from the likes of Richard Gere, Gregory Hines and Diane Lane, you'll be surprised at the strong supporting cast. Early work from the aforementioned Nic Cage, Laurence Fishburne and James Remar help to create a lush landscape where the story flows as it was originally intended.

With a running time approaching two and a half hours, you might think that Francis Ford Coppola overstuffed the film with fluff, but you would be wrong. The additional scenes and sequences help to orchestrate a new story that actually makes sense and is even more compelling than the original version.

I will say that there are two aspects of this Encore edition that I was disappointed with, but they are minor. First, I was surprised that after going back to the original masters, Coppola didn't create a 4K UHD version to better showcase the music and colorful wardrobe. As it stands, the film looks better than it has ever looked in the past, but I can't help but wonder what the 4K treatment would have delivered.

Second, the number of bonus features available are rather paltry for a film celebrating its 35th Anniversary. There's an introduction from Francis Ford Coppola and a short Q&A session. Now granted, they went back and added back many of the deleted scenes and whatnot to truly create a new cinematic experience and for that I'm grateful, but wouldn't it have been fun to do a more in-depth dive into the history of this film?

These small quibbles aside, The Cotton Club Encore is a wonderful transformation of a film that was flawed. The end result is finally something that is both entertaining and timeless. Francis Ford Coppola should be applauded for sticking to his guns and finally being able to deliver his vision completely. Now if we could just get that Snyder cut of Justice League...

The Cotton Club Encore is now available on DVD and Blu-ray and will enjoy a limited theatrical engagement this week.