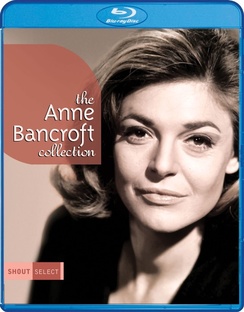 There are few actresses that come to define a certain moment in time, but one of them was most certainly Anne Bancroft. If the name doesn't ring a bell, then you are surely under the age of 30 and really need to watch more movies.

Does the alluring Mrs. Robinson as in "Are you trying to seduce me Mrs. Robinson?" fame help at all? Well, if you're still scratching your head, then I strongly suggest that you pick up this week's stunning new collection from Shout! Factory, The Anne Bancroft Collection.

For the rest of us, this impressive set of Anne's films was curated by her husband Mel Brooks and truly spans her impressive career and shines a light on her versatility and range. While Anne won an Oscar for her work in The Miracle Worker, few people realize that she was nominated for an Academy Award four other times and three of those films are in this collection.

While Anne Bancroft is probably best known for her dramatic work in The Miracle Worker and The Graduate, she was also quite an adept comedian and it didn't hurt to have one of the funniest men alive by her side. Anne often chipped in with bit parts in her husband's film, but they both take center stage in To Be Or Not To Be which is also a part of this massive tome.

Ironically, while the film centers on this vast age different between Benjamin and Mrs. Robinson, Dustin Hoffman was 29 when the movie was filmed and the more worldly Anne Bancroft was only six years older than him at 35. Katharine Ross, who played Mrs. Robinson's daughter was only eight years younger than Anne, but hey, that's the magic of movies, right?

The collection also features two Blu-ray debuts and they are big ones. The Anne Bancroft Collection is the only place where you will be able to find Agnes of God and 84 Charing Cross Road on the vastly superior Blu-ray format. The inclusion of these two movies makes the set worth the cost alone.

Both films feature top-notch performances from some of Hollywood's A-listers and neither have been readily available for some time now. 84 Charing Cross Road, in particular, has a performance from Anthony Hopkins that is among the best that he has ever turned in.

But the films aren't the only selling points of this spectacular set. No, several of the films include a treasure trove of bonus features that will surely satiate even the most devout Anne Bancroft fan. In the end, the collection includes over 16 hours of content and a 20-page booklet that truly celebrates the fabulous acting career and life of Anne Bancroft.