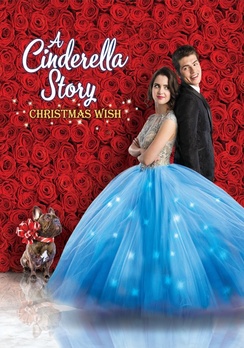 Warner Bros. Home Entertainment provided me with a free copy of the DVD I reviewed in this news story. The opinions I share are my own.

I am generally a sucker for a well-made Christmas movie. Not stalk the Hallmark channel in July for every single holiday romp possible sucker, but if you make a solid Christmas movie, I'm going to watch it.

When the opportunity to review A Cinderella Story: Christmas Wish presented itself, I was torn. On one hand, I do like holiday fare, but I have long suspected that the magic has worn off the Cinderella Story franchise. I mean do we really need a fifth installment?

The film is a basic mash up of the familiar Cinderella Story and several holiday tropes, but with a fresh take that will certainly resonate with younger viewers. Kat has dreams of becoming a singer-songwriter, but her evil stepmother and two stepsisters are doing their best to quash those aspirations. When Kat takes a job as a singing elf at a tree lot, she meets the new Santa and sparks fly. A mysterious invitation to a prestigious winter gala sets off familiar storylines of jealousy and hidden identities before Kat is able hook up with her "prince."

I had to do a double-take when I was watching this film because it truly had the feel of a successful Disney movie like Zombies. There are more songs and dance sequences in this film than in the entire Cinderella Story put together. From that aspect, the film felt like a fresh take on the tired franchise and helped it to stand apart from its predecessors.

As someone who considers White Christmas as his favorite holiday film, the musical elements with the holiday themes were a welcome treat. I feel that had they simply created a Christmas version of a Cinderella Story film, it would have failed spectacularly. As it stands, I thoroughly enjoyed the film and I wasn't the only one.

I have two young children in the house and I relish any opportunity that I have to share my reviews with them. Let's face it, they are the targeted audience of A Cinderella Story: Christmas Wish and their reactions would far outweigh my own. I'm happy to report that my son and daughter both thoroughly enjoyed the movie and it was my daughter who made the comparison to Zombies above. Considering that we have seen Zombies about 200 times now, I think this is about as high of compliment that she can give.

I found it hard not to think of Elf while watching this movie. I get it, there's something reductive about all Christmas movies, but I think it was the charisma shown by lead actress Laura Marano and how much she reminded me of Zooey Deschanel in Elf. Their characters are very similar and had similar aspirations so it's a natural fit and one that I think really holds up.

As you can see below Laura really brought a natural enthusiasm to the role and her personality truly shines through in the end. I haven't seen a lot of work from her to date, but I have a feeling that is going to change.

A Cinderella Story: Christmas Wish is a welcome addition to the vast world of holiday films. It's easy to look at the sheer volume of films being pumped out by the Hallmark Channel and get intimidated by them. Don't let this one get lost in the weeds, A Cinderella Story: Christmas Wish is clearly the best new holiday film to come to market for this season and you will want to own it for repeat viewings for many holiday seasons to come.

A Cinderella Story: Christmas Wish is now available on DVD and Blu-ray.