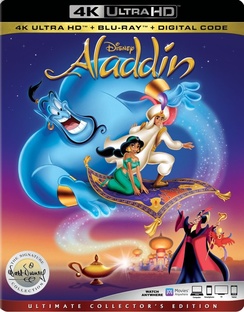 Ok, this one is going to be a doozy. This week, Disney has blessed with a double dose of Aladdin on 4K UHD and it's going to be tricky to keep them separate, but I'll try my best.

This first review is for the beloved animated film starring Robin Williams that makes its debut both in the Walt Disney Signature Collection and on 4K UHD. Released to maximize the coattail effect of this week's release of the live-action remake of Aladdin, the animated classic is a welcome addition to our collection whenever it wants.

The 1992 animated film was released during the period of renewal at Disney animation and predated the release of The Lion King by two years. If the The Lion King was the unmistakable earthquake that announced Disney's return to animation dominance, then Aladdin was the early tremors that gave you warning that something significant was about to hit.

The film follows the likable street rat Aladdin who is just trying to eke out an existence in the mythical land of Agrabah when he is recruited by the nefarious Jafar to extricate a magical lamp from a cave. Things don't go exactly to plan and suddenly Aladdin finds himself with a genie at his beck and call offering three wishes to change his life.

The original animated Aladdin is a timeless classic that has been enjoyed pretty regularly in our household. Our kids love it and despite having seen it too many times to count, I never get tired of Robin Williams doing his schtick as the adorable genie.

Our reverence for the film is so great that we were appalled to learn that Disney was making a live-action version of it (more on that in a later review). I mean, how could anyone ever replace Robin Williams as the genie and not be immediately branded as an imposter and a fake? Again, more on that later.

I was surprised when Disney didn't opt to release the animated film on 4K to coincide with the theatrical release of the live-action Aladdin. This guaranteed that both films would release to home entertainment on the same day and create a bit of confusion in the marketplace. While the artwork for one is animated while the other obviously is not, I'm sure that there will be a few returns in the coming weeks because of the confusion. Of course, how do go to the store to buy the new version of Aladdin without picking up the older one too? Disney's playing chess while the rest of us are struggling with checkers.

Despite having seen Aladdin on average about once a month since our kids were born, we were all excited to check out the 4K UHD version to see all of the new bells and whistles. I am happy to report that the 4K UHD version did not disappoint when it comes to the look and sound of the film.

The new 4K transfer with HDR10 is practically pristine and you will notice subtle upgrades from the earlier Blu-ray release. In particular, the palette of colors is expanded and subtle variations stand out in both the market place chase and any musical number. The blacks are a bit richer and help the colors to pop out in the various night sequences, such as Aladdin and Jasmine's magic carpet ride.

The new Dolby Atmos audio track is a welcome addition as it truly breathes new life into all of the wonderful songs. Beyond that though, the addition of the vertical tracks allows the film to showcase some of the atmospheric channels that weren't previously available to them. In other words, you truly feel as though you are on that magical carpet flying through the air and Jafar's menace is truly that much more terrifying thanks to the Atmos track.

One area that was a bit of a mixed bag though was the special features. There are a few new surprises here including a new Sing Along version of the film and an in-depth interview with Scott Weinger revisiting his role as the voice of Aladdin for almost 30 years. But, many of the classic bonus features were not included in this version, so you will have to keep the Diamond Edition Blu-ray if you want to retain all of those legacy bonus features.

That said, I did particularly enjoy the new feature "Let's Not Be Too Hasty" that highlighted the voice actors that worked so diligently to bring our beloved characters to life. A sample of that feature is above and it's a great addition to this version.

Another noticeable elephant in the room is the fact that this is the first release of Aladdin since Robin Williams' untimely death and there wasn't a retrospective of him on the disc. Sure, the previously available Genie outtakes feature is here, but I was sort of hoping that they would have put together a special Robin Williams tribute from filmmakers and cast as his performance is what truly makes Aladdin special.

Still, that's a small gripe for a very worthy addition to the family's film catalog. Thanks to the new video and audio enhancements, the 4K UHD version will ensure that we are able to enjoy Aladdin for many more years to come. It is worth the investment, but be warned that you might have to hold onto the Diamond Edition to get all of the bonus features available.