Review: 'The Banana Splits' is a groovy, gory time 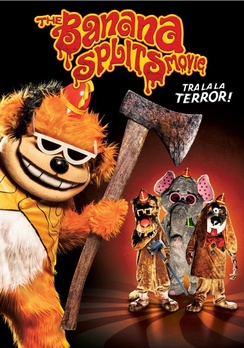 Warner Bros. Home Entertainment provided me with a free copy of the Blu-ray that I reviewed in this Blog Post. The opinions I share are my own.

Not that all of the legal mumble-jumble is out of the way, let me tell you a story. Let's take a trip back to a simpler time, say the 1970s. Drugs were everywhere and you only have to watch children's programming of the era to realize just how stoned everyone was.

For me, I was born in 1974, a few years after The Banana Splits went off the air, but thanks to the power of syndication, they shaped my childhood as much as Sesame Street or H.R. Pufnstuf. My wife and I were lamenting recently that our kids will never experience the sheer joy that was Saturday morning cartoons.

This block of early morning entertainment aimed at kids was must-see TV for our young generation and surely helped our parents sleep off plenty of wild and crazy Friday nights. Unfortunately, our kids will never get up early on Saturday brimming with anticipation as they wait for the favorite cartoons and munch on some cereal.

Nope, our kids simply binge whatever show currently fits their fancy on any number of electronic devices. So much for having to time your bathroom breaks to coincide with the commercials.

As a kid of the 1970s, I am convinced that the Saturday morning block of cartoons helped shaped me into the person I am today more so than any other single thing. It was where I was introduced to H.R. Pufnstuf and Scooby-Doo and The Smurfs. Hanna and Barbera were my Gods and I worshipped them at the altar of the TV every week without fail.

While certain shows and concepts stick with you over the years, there was just something unforgettable about The Banana Splits. It was a Hanna-Barbera show and the first stab at puppeteering from Sid and Marty Kroft that would later evolve into H.R. Pufnstuf. More than that though, there was just something about The Banana Splits that was plain odd and it didn't really dawn on me until I watched The Banana Splits Movie. They were creepy as hell, but it didn't dawn on me as a kid. Now though, I will never be able to see them again as vestiges of my innocent youth. Nope, they will forever be evil.

The Banana Splits Movie follows a family that attends a taping of the long-running children's show as a birthday surprise for their youngest child Harley. But when a studio exec unexpectedly decides to cancel the show, the lovable characters will do whatever it takes to make sure that the show goes on.

If ever there was a film that was right up my alley, The Banana Splits Movie just might be it. I grew up as a fan of the original TV show and I spent my formative years binging as much classic 1980s horror as my teen eyes could stand. Eschewing CGI for practical effects, The Banana Splits Movie is a real throw-back to latex and fake blood aficionados.

I realize that many of you out there reading this are probably unfamiliar with The Banana Splits. Basically, for you, this movie would be what would happen had the Teletubbies turned out to be serial killers. I'm still not convinced that they aren't by the way. I've got my eye on you Tinky Winky.

It's clear from the bonus features that the filmmakers brought a reverence of the characters to the table and that's evident in all of the little details. There are deep references to the original title ("The Banana Bunch") and the show that it parodies ("The Monkees") sprinkled throughout the film that pays great fan service to this show's devout following. And yet, the film is clearly a horror film and this juxtaposition works better than it really should.

Let's face it, we were too young at the time to realize it, but there was something really creepy about those costumes. Our suspension of disbelief was so strong that we failed to make the obvious connection that these characters certainly could have moonlighted as savage killers. What's even creepier is that the original characters have been given an upgrade for this film. No longer are they simply "man-in-a-suit" characters, but rather animatronic abominations that are one bad line of code away from slicing and dicing its audience.

Did you ever visit Showbiz as a kid? It was that Chuck E. Cheese knockoff that featured an animatronic band called The Rock-afire Explosion that would play while you ate their cardboard pizza. It was beyond creepy and that animatronic band fueled my nightmares for weeks after a visit when I was a kid. I get a chill just thinking about it right now. So, The Banana Splits Movie taps into this fear as well.

Beyond the nostalgia and gimmick though, how does The Banana Splits Movie hold up as a pure horror film? Quite well, to be honest. The reliance on practical effects gives the movie a real retro feel that will instantly make you think of the original Child's Play and other classic 1980 slashers.

The use of animatronics is interesting not just for playing on my childhood fears, but also to suggest that the characters have achieved a level of consciousness that extends beyond simply obeying their prime "the show must go on" protocol. The film thankfully doesn't waste too much time pondering the ramifications of its character's actions, relying instead on the gore to distract you. But as you ponder the film long after the credits, you start to wonder if there was more than simple haywire computer programming going on.

Perhaps that's an idea they will explore in the inevitable sequel. Because what would a good 1980s horror slasher homage be if not also masquerading as a vehicle to a whole host of slasher sequels. I, for one, can't wait to see the Sour Grapes show up in the next one. Now, that would certainly be fun.

It truly is amazing that the filmmakers were able to get Warner Bros. consent and license to the characters to make this movie. Beyond Sid and Marty Kroft and Hanna-Barbera, The Banana Splits featured a bevy of talent behind the scenes. The entire first season was directed by Richard Donner. Yes, that Richard Donner of Superman and The Goonies fame. One of the series' most popular songs "Doin' the Banana Split" was written by Barry White. So, for this property to get this sort of reimagination is just spectacular and everyone involved should be applauded.

Finally, the one thing that really gave me the creeps when watching The Banana Splits Movie was how accurate the voices were to the original voice actors. I mean, the characters in the original series were voiced by absolute legends in the voice acting game such as Paul Winchell, Daws Butler, and Allan Melvin. All three gentlemen have passed on, but I was sure that they had simply sampled their previous voice work for the series. I was wrong.

As part of one of the bonus features on the Blu-ray, we meet the amazingly talented Eric Bauza who voices all three of the main characters in the film. Sadly Snorky is still mute. Below you will get a taste of his genius at work and his authentic touch really ratcheted up the chills.

At the end of the day, The Banana Splits Movie touches on the nostalgic notes of a simpler time and turns it onto its ear. It also delivers a convincing new horror entry that I truly hope leads to a new franchise of children's shows gone bad, because there are plenty of creepy characters out there with a literal ax to grind.

The Banana Splits Movie is now available on Blu-ray and DVD.