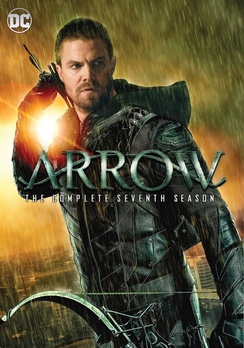 As someone who has stumbled around the CW's superhero shows like a drunk at last call on a Saturday night, I can appreciate what they were trying to accomplish with Arrow: The Complete Seventh Season. Arrow was always a show with a dark edge, but an even darker endgame that anyone familiar with the comics can tell you, so how do you plan out a show with such an ominous finale?

You sprinkle in hope and play with alternate dimensions of course.

Arrow: Season 7 represents a new direction, not just for the titular vigilante, but also for the series as a whole. Oliver Queen has revealed his identity to the public and turned himself over to the FBI. The first third of the season sees Oliver in prison and all of the amazing setups that you can imagine. After the "Elseworlds" event, the rest of the season focuses on the new Green Arrow and her connection to Oliver and a high risk/high reward flash-forward concept that actually pays off in the end.

As someone who has checked in with all of the CW superhero series from time-to-time, Arrow is the one that always impresses me the most. Perhaps it has to do with its incredibly dark tones or the best supporting actors, but it's the one superhero show that I don't feel swerves into silliness too often. I love me some Supergirl, but that is a show that I can watch with my young daughter and not worry about it getting too weighty. Arrow, on the other hand, is a show that I watch all by myself and enjoy the dark overtones.

While most seasons of Arrow live or die by the main villain, Season 7 is one that really benefitted from two main antagonists. First, Kirk Acevedo is perfectly cast as Diaz and it was nice to see him get elevated to series regular for this season. His take on the character is pitch-perfect and he really gives Oliver a foil while in prison.

In that same vein, Vinnie Jones is great as Brick. He has been a great recurring character on the show and his inclusion in Season 7 only adds his significant cinema clout to the show. I have been a big Vinnie Jones for a long time and it's always good to see him show up in the odd TV show now and then. Given that his other show on ABC was canceled, perhaps we will see him pop up on other CW shows.

Of course, it's impossible to praise Arrow without giving the man Stephen Amell the props he doggedly deserves. He has literally raised the bar for superhero TV and his Oliver Queen will go down as one of the best comic adaptations to ever grace the small screen. While the forthcoming eighth season has already been revealed to be the last in the series, one hopes that Amell will get the chance to bring Arrow to the big screen in a DC film. Now, that would be pretty incredible.

Speaking of the upcoming eighth season, Arrow: Season 7 does a great job setting up the ultimate season with various interesting story arcs that should provide a satisfying closure for the beloved character. With the CW superhero universe expanding more and more every day, it's hard to believe that this will be the last time that we see Oliver Queen.

One last thing that I will point out about Arrow: Season 7 that really impressed me was the sheer amount of bonus features included on the physical offering. Most seasons rarely, if ever, include any bonus features these days, but Arrow not only has all three episodes from the "Elseworlds" crossover event (on Blu-ray), but it also has over two hours of additional content ranging from deleted scenes, to a gag reel, to featurettes. It truly is a treasure trove of Arrow goodies that any fan will surely enjoy.

Arrow: The Complete Seventh Season is now available on DVD and Blu-ray.