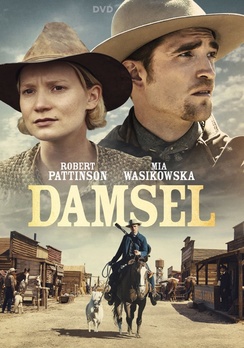 If you simply picked up Damsel after looking at the box and thought you were getting just another western film, you would be pleasantly surprised. The film is anything but a typical western, but if you like westerns then you will appreciate the film's many efforts to flip the genre on its proverbial ear.

The Zellner brothers are best known for Kumiko, the Treasure Hunter a film that dramatizes the urban legend about a Japanese woman who came to the United States to search for the buried money from the film Fargo. Like their filmmaking brother peers, the Zellners like to dabble in the same absurdity of the Coens and this irreverence is on full display in Damsel.

Robert Pattinson stars as Samuel Alabaster, a rich pioneer who ventures out to the American frontier to save his personal Damsel in distress Penelope. The only problem is that Penelope (played by Mia Wasikowska) is anything but in distress and Samuel's best-laid plans are all for naught.

If you're the type of person that wonders what sort of movie would result if they combined O Brother, Where Art Thou? and A Million Ways to Die in the West, then you're in luck. Damsel is precisely the type of film that combines the sensibilities of these movies with the nuance of the genre that any diehard western fanatic will appreciate.

The fact is that western films have long been steeped with these tropes about women being victims and needing the strength of a man to survive. Of course, these tropes are largely propagated by the same male-dominated industry that spawned the #MeToo movement. In fact, you could make the argument that Damsel is a contrite response to that movement, but I have to believe that the film was gestating long before the hashtag came to prominence.

No, the Zellner brothers are simply exposing the absurdity of this belief by presenting a strong protagonist in Penelope that defies all of our preconceptions. There is a trend in western films of late to highlight strong pioneer women in such movies as Jane Got a Gun and Woman Walks Ahead.

Robert Pattinson continues his eclectic choice of roles following his turn as a sparkly vampire in the Twilight series of films. I previously praised his performance in Good Time earlier this year and this role is about as different as you can get from that one. And yet, he brings a certain level of naivety that lends plenty of authenticity to Samuel.

The genre-bending performance from Mia Wasikowska is yet another in a long line of excellent work that ranks her up on the list of most underappreciated actresses working today. Her Penelope is fierce and more capable of surviving the rugged country than her would-be rescuer Samuel.

Damsel is the type of film that is at its best when it doesn't take itself too seriously. Thankfully, the Zellner brothers enjoy this irreverence and have plenty of experience of delivering plenty of laughs at the absurdity of their own story. But don't worry, the film does not stray into the spoof territory of say Blazing Saddles and it is all the better for it.

If you enjoy westerns but aren't too hung up on the whole Damsel in distress myth, then you will enjoy this film thoroughly. Damsel is now available on DVD.