Review: History gets a facelift with 'Woman Walks Ahead' 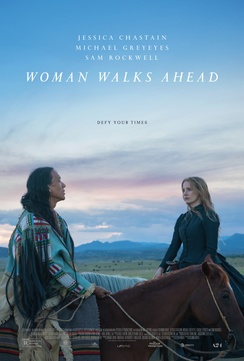 Where do we draw the line on what constitutes a true story? Does the story need to contain a certain amount of truth in it to earn the designation? Or can we simply will it upon a fictional story ala Fargo? The answer on most of these would-be true stories is somewhere in the gray area between fact and fiction.

Enter Woman Walks Ahead. To be fair, the marketing materials that accompanied the film clearly indicate that it is a "fictionalized account of the true-life events of New York portrait painter Catherine Weldon and her time in North Dakota with the Lakota Sioux tribe." But the problem is that no one knows who Catherine Weldon is and the mere mention of Sitting Bull in the trailer gives the audience an assumption that what they are watching is a true account of events from our past.

As it turns out, the film is a ruddy gray mixture of both truth and dramatization. The film portrays Catherine Weldon as a naive widowed artist who travels to North Dakota with the sole ambition to paint the mighty Chief Sitting Bull.

The reality is that Catherine Weldon was anything but naive when she and her illegitimate 12-year-old son set out to meet Sitting Bull. Yes, she wanted to paint the Lakota Sioux chief, but she was a member of the National Indian Defense Association and her true motives were to aid the Sioux in their fight against the U.S. government for the sovereignty and lands.

By contrast, the film portrays Catherine Weldon as a woman who becomes infatuated with her hosts, Sitting Bull in particular. There is plenty of flirtation, but thankfully the film never insinuates a physical relationship between Sitting Bull and the woman that would become his secretary and interpreter.

While the film does play fast and loose with the facts in order to make a more compelling story, there is enough truth in between the falsehoods to paint a pretty accurate picture of the relationship between the government and the native people at this time. What is a bit disappointing though is that the film falls into the western film trope where strong-willed women are non-existent.

Jessica Chastain portrays Catherine Weldon and her performance is certainly up to her high standards, but I'm left wondering how much more powerful it could have been had she been able to portray Catherine as the strong, opinionated woman that she was in real life. Instead, she is surrounded by stronger men in the form of Sitting Bull and Sam Rockwell's Colonel Silas Grove that tend to overshadow her a bit.

All of that said, films like Woman Walks Ahead are important because they do shed some light into the dark areas of our country's past. There has been a dearth lately of films that give an account of our government's shameful relationship with Native Americans following the Civil War. This is also a period of U.S. history that is woefully underserved in our educational system. So, perhaps the fictionalized elements are simply the price that we need to pay for a story that properly highlights this painful period of our history.

The film itself is beautifully shot and transports the audience back to a simpler time before cell phones and constant stimulation. The performances from the cast are spectacular and help to shape a story that is mostly true, even if it glosses over a few key details. For that reason alone, you will enjoy Woman Walks Ahead and might even learn a thing or two.

Woman Walks Ahead is now available on DVD and Blu-ray.