Review: 'Elena of Avalor' continues to expand its rule

This is the third DVD review that we have done with Elena of Avalor and the one constant is that the show continues to get better with each passing episode. With this week's Elena of Avalor: Realm of the Jaquins, the main content on the DVD is the movie special of the same name and a couple of other Jaquin episodes from Season Two.

So, yes, that's three DVD offerings from season one and there are still episodes from that season that haven't seen the light of day on DVD. You might remember that I have been grumbling lately about this new direction that Disney is going in with the kid-oriented original content. Instead of releasing complete seasons at a higher price point, they are grouping episodes together for less money.

Of course, if you add up what you spent on three DVDs, you're pretty close to a suggested retail price of a complete season, but I digress. My daughter still continues to enjoy Elena of Avalor very much and the Realm of the Jaquins special still remains one of her favorite episodes of all time.

Realm of the Jaquins finds Elena celebrating the one year anniversary of her rule and traveling to Vallestrella, the domain of the Jaquins. Along the way, she accidentally releases a mischievous forest sprite intent on taking down Avalor. Now, Elena and her Jaquin friends must come together to stop the sprite before Avalor is destroyed.

What I really enjoy about these specials is that Disney takes things up a notch from a production standpoint. This hour-long special features three full songs and a rather robust storyline that will be the main thrust in season two.

You see, Realm of the Jaquins was supposed to be the season finale, but they eventually retooled the layout and added a couple of episodes after the special. Realm of the Jaquins reintroduces the viewers to Shuriki, the evil queen, who becomes the main antagonist for season two. It is a good launching board into season two, but it's pretty evident that Disney isn't too concerned about the formal structure of things.

Case in point, this DVD offering actually combines the special with two episodes from the early part of season two. Both season two episodes involve Jaquin storylines so their inclusion here feels very organic and is yet another example of Disney's strategy paying off.

One very cool thing that Disney is doing with its Elena property is bringing in A-list voice talent for the supporting roles. Lou Diamond Phillips brings the evil Victor Delgado to life, while Jane Fonda voices the big bad villainess Shuriki. Cheech Marin also lends his voice to a recurring character and these types of actors certainly give the property more legitimacy, especially with the older set like myself.

The DVD also includes 10 bonus shorts, the "Adventures in Vallestrella" series and the "Scepter Training with Zuzo" snippets. While these little pieces don't add up to a whole lot of time, they do add plenty in the experience. My daughter had missed a few of these when they aired, so it was good for her to complete her experience with the complete set of shorts.

At the end of the day, Elena of Avalor: Realm of the Jaquins is competitively priced and won't break the bank at all. If you have a child like mine that enjoys this show, I found that having a permanent record of this special at their fingertips quite handy. 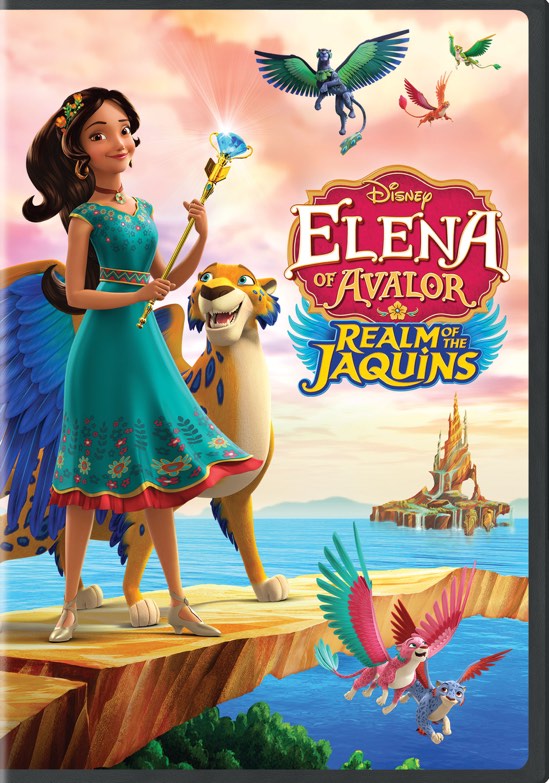