Review: 'Guardians of the Galaxy 2' is 4 times better on 4K UHD 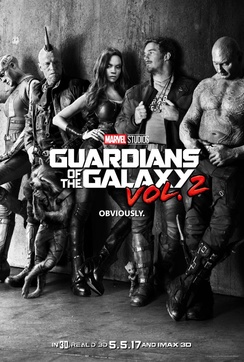 Believe it or not, I'm not going to bury the lede on this review. Guardians of the Galaxy Vol. 2 is an amazing film that I thought was better than the original. If you have the ability to play 4K UHD Blu-rays, then you NEED to own this film on this format.

Well, I guess that I'll be going now. What? You want more? OK, fine.

In order to appreciate just how momentous of an event today is consider this fact. Up until today, Disney had never released a single film on the nascent 4K UHD Blu-ray format. Not a single one. As the company that owns the home distribution rights to Marvel, Pixar, Star Wars*, etc., their continued obstinance in embracing this brave new format was a consternation to the early adopters.

If there was one company who had the content that technophiles wanted to see on 4K UHD Blu-ray, Disney was it. I mean who doesn't want to buy Star Wars for the tenth time?

But seriously, the Marvel and Pixar films were made to be exhibited in this format so today truly is one of those banner days that we will look back upon as a turning point in the adoption of 4K UHD Blu-ray as the pinnacle of home entertainment. Eclipse? Schmeclipse.

And what a debut it is. First, the HDR is spectacular throughout the film, but it really shines when the heroes first arrive on Ego's planet. The scene where Drax is bursting the color bubbles into smaller color bubbles is quite impressive. In comparing it to the standard Blu-ray, the resolution and details in that sequence alone are worth the cost of the 4K UHD Blu-ray.

The 4K UHD Blu-ray and standard Blu-ray include the same impressive gluttony of bonus features. If there's one thing that Marvel and James Gunn do better than almost anyone else on home entertainment, it's providing a plethora of added content that makes the decision to purchase the disc an easy one.

For me, the highlights of the bonus features were the massive four-part feature about the making of the film and the gag reel. It's pretty obvious that the cast and crew alike have so much fun making these films and it's great to get a bit of a behind-the-scenes look to realize that the true secret to these films' success is the camaraderie shared by one and all involved in the making of the film.

I am also a big fan of deleted scenes and this collection includes two true deleted scenes and two extended scenes. I'm always amazed in comparing extended scenes with the final edited versions to try and get inside the filmmaker's head. Sometimes the cuts are obvious for pacing reasons or tone, but in others you really appreciate the genius involved with making the toughest of decisions, deciding what will end up on the screen and what will fall to the editing room's floor.

If you're a fan of David Hasselhoff (and who doesn't love the Hoff?), then you'll want to check out the cheeky retro dance party. His cameo in the film was hilarious, albeit brief so his kitschy dance party clip is a fun way to extend his presence in the Guardians of the Galaxy world.

While it's easy to single out Chris Pratt or David Bautista for their star-making turns, the bonus features really give you an appreciation for the voice work turned in by Vin Diesel and Bradley Cooper. Both of these actors are best known for their work when they are the literal face of the franchise, so it's nice to see them putting in just as much work into their vocal parts that they would for their other roles.

Guardians of the Galaxy Vol. 2 is currently available on 4k UHD, Blu-ray and DVD, but I would recommend skipping the DVD and going for either the Blu-ray or 4K UHD. The DVD does not contain any bonus features whatsoever and you will be really kicking yourself when you realize what you are missing for the extra $5 or so.