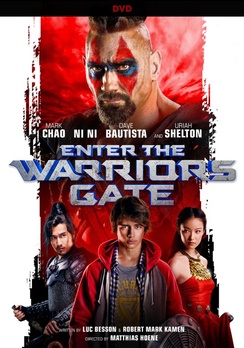 If you have seen either of the Guardians of the Galaxy films, then you know who David Bautista is. Unfortunately, if you noticed this film in his credits and were hoping for more of the chuckles that his Guardians character Drax elicits, then you will be sorely disappointed.

The former WWE wrestler gets in touch with his tough-guy antics for his role in Enter the Warriors Gate, and that's not necessarily a good thing. Sure, he's serviceable as a cardboard cutout bad guy, but when you can see what he can bring to a role thanks to his Guardians work, you know that he's leaving a lot out of his performance here.

I don't want to spend the entire review bashing David Bautista because his performance isn't the only thing holding back this film. No, the film was a trainwreck long before he even showed up on the screen. I think the main thing that dooms this film is that it really doesn't know what it wants to be.

Is it a comedy? Is it an action-fantasy? It seems that they try to combine all of it into a mess that ultimately relies too heavily on comedy that isn't all that funny. The kung fu action scenes are mostly solid, but they are too often punctuated by the inane antics of the lead Uriah Shelton.

While we are on the subject of the lead, I don't want to get into a whole "white savior" tirade, but in much the same way that we have seen earlier this year with Matt Damon in The Great Wall and Scarlett Johansson in Ghost in the Shell, why is Hollywood afraid of casting an Asian hero? In Enter the Warriors Gate, Uriah Shelton's inclusion itself takes away from what could have been a fun fantasy film.

Instead, the film seems to want to wallow in the "fish out of water" rather than fix the bias that is the real story. OK, I'll put away my soapbox, but the fact that I'm having these thoughts while watching the film just proves how much this film underdelivers on what is an interesting concept.

Granted, I have to couch my review with the caveat that I am clearly not the target audience of this film. This film is meant to be enjoyed by tweens and teens who spend the better part of their days gaming online. But, I think that I have enough experience to realize that sometimes a stinker is just a stinker, even if I'm not the intended audience. In my opinion, Enter the Warriors Gate is one of those films that could have been good, but it didn't execute enough to make up for its shortcomings.

Enter the Warriors Gate is now available on DVD and Blu-ray.