Review: Paradise has a dark side in 'Extortion' 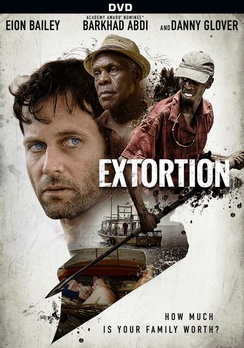 Most people first discovered Eion Bailey in the HBO series Band of Brothers and enjoyed his performance on Ray Donovan, but I first encountered in a small indie film A Better Place. The film was written and directed by Kevin Smith friend Vincent Pereira and I was able to enjoy it during one of Kevin's Vulgarthon film festivals.

The lead actor in the film was a really young Eion Bailey and his talent was evident even then. While he plays a dark character in A Better Place, his later roles have tended to be more mainstream and while that has certainly made him a more likable actor, I always felt that he was best when his character had an edge.

At the beginning of Extortion, Kevin Riley has anything but an edge. In fact, this character seems to be just another in a long line of safe characters that Eion Bailey has played lately, but that quickly goes south in a big bad way. He and his family are in the Caribbean on a vacation and the very predictable foreshadowing setup ends with him and his wife and son stranded on a small deserted island.

After the requisite turmoil associated with coming to grips with the reality of their situation, a fortuitous boat called "MacGuffin" (not really) passes by and saves the day. Not really. Well, because if that happened, the movie would have only been about 30 minutes long and pretty boring.

No, the "captain" of this vessel is none other than Barkhad Abdi. Who's Barkhad Abdi? Oh, just some dude who was a "Captain" in another sea-faring adventure. Last we saw him, he was trading one-liners with Tom Hanks and now he's squaring off with Eion Bailey. Don't worry, Abdi more than holds his own in this film too.

In fact, at the risk of becoming typecast as a modern day pirate, Barkhad Abdi is quickly etching a spot in our heart as a merciless foil for any situation. While I doubt that we will see him starring in any buddy comedies in the near future, he can certainly make a good living with these types of roles. Just ask Eric Roberts or Michael Madsen.

No, from the moment that Barkhad Abdi enters the scene, the film is elevated from the standard made-for-TV fare and acquires the edge that this type of modern-day exploitation film needs. He agrees to help Kelly and his family in exchange for $1 million.

At this point, you would think that the film would simply devolve into any of a number of ransom/kidnap/plot for money films, but there's something different about Extortion. The majority of the back half of the film is propped up thanks to a rare return to form by Danny Glover. I have to admit that these last few years have seen a proliferation of shoddy films whose only claim to anything is the fact that they were able to cast Glover.

At this point, that's hardly a badge that one should wear proudly. In the immortal argument of burning out or fading away, Danny Glover's later career is quickly becoming a rather persuasive argument for the former. Thankfully, though, he turns what might be his best performance in a decade and saves the film from simply becoming just another B-movie headed to the bargain bin.

I won't give away any of the twists and curves of the third act, but I will say that I was really hoping that the film would swing for the fences. In the end, they played it safe, so to speak, and the film was pretty good, but it could have been so much better. There were moments of this film that reminded me of one of my favorite films in the last year Nocturnal Animals.

Ultimately, Extortion wasn't quite as exciting or interesting as Nocturnal Animals and the film was a little too safe for my liking, but I was pleasantly surprised that it exceeded my very low expectations. If you were looking for a lighter action version of Taken, this film comes pretty close.

Extortion is now available on DVD.