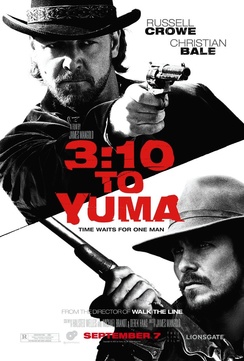 I have a confession to make. Until last week, I had not seen 3:10 to Yuma. In fact, I had not seen the original version either. It's not that I have some sort of great aversion to westerns, it's just that sometimes films tend to fall into the cracks of life and before you know it a decade has gone by.

Yes, it has been 10 years since 3:10 to Yuma debuted in theaters, but this week the film gets a new lease on life thanks to 4K UHD Blu-ray. Where does the time go?

3:10 to Yuma is also one of my wife's favorite films, a film that she actually owned on DVD before we met. I realize that you don't know, but this is a huge compliment from my wife as she didn't own that many movies before we started dating. In fact, considering that it was so beloved by her, I'm surprised that this was my first time watching the film.

After watching it, I'm still wondering why I never went back and watched it sooner. Having not seen the original film, I have no frame of reference to compare it to, but 3:10 to Yuma was a gritty throwback type of western in the vein of Unforgiven (which makes its 4K UHD Blu-ray debut later this month). Of course, this isn't anything new to those of you that have enjoyed the film over the last 10 years.

For those of you, like me, that have procrastinated seeing it, the film follows an infamous outlaw who is captured and a Civil War vet that takes it upon himself to deliver the outlaw to jail via the 3:10 to Yuma. As you can imagine, the outlaw's former gang is hot on their heels to spring their incarcerated leader and plenty of bullets are exchanged.

What I enjoyed most about the film is that while it does indeed feature plenty of the western action that endears that genre to its audience, the film is also an interesting character study between two men on opposite poles of the moral compass. The fact that they are able to see past their differences and get a level of respect for the other man is itself a reflection of the atmosphere of the wild, wild west.

We are trained from birth to look at things through a prism of good or evil, black or white, but the reality is that life is often filled with many shades of gray. No, not those Shades of Grey. This ambiguity and mutual appreciation is something that is often lacking in many westerns where the characters literally wear the color that corresponds with their intentions.

Aside from the leads Russell Crowe and Christian Bale, who are both at the top of their game, the rest of the cast is littered with grisly vets giving top-notch performances or then newcomers that showed the promise that they ultimately fulfilled. Peter Fonda delivers a career-topping performance that sort of bookmarks his earlier work in Easy Rider as two truly impressive Americana turns.

As for the young stars that provide glimpses of what they were able to deliver in the last 10 years, Ben Foster simply knocks it out of the park. He was certainly able to build upon his work in 3:10 to Yuma and has leveraged it for a rather impressive career. I admit that I was late to join his bandwagon, but now that I am fully on board, I can truly appreciate his early work where he was honing his craft. Another familiar face that you'll spot is Logan Lerman who has certainly come a long way in the last decade.

Since I had never seen the film in any other format, I threw in the Blu-ray of the film so that I could accurately examine the 4K UHD Blu-ray. While there is a certain limitation in quality from a film that was created a decade ago (compared to films shot today), the difference between 4K UHD and regular Blu-ray is quite stunning.

I was pretty sold that films set in space with heavy action were the type that would benefit the most from the new format's advancements, but after watching 3:10 to Yuma, I am convinced that 4K UHD was made to showcase western films. The superb contrast and the wider color gamut afforded by the High Dynamic Range really make the desolate landscape pop on the screen.

The gritty nature of the film combined with the speed of the action is just heads and shoulders above the regular Blu-ray. I don't mean to sound like a 4K UHD snob, but when I watched the regular Blu-ray in certain scenes you could really see distortion and pixelation in the background that wasn't on the 4K UHD. This pixelation is a pet peeve of mine, especially when watching TV, so when I see it in films, it is really noticeable.

This higher resolution and quality delivers the closest experience in the home to deliver the director's vision of the film and for that reason alone, I'm completely team 4K UHD. As the format takes off, it will be interesting to compare the new 4K UHD versions to their predecessors, especially for older films.

If there's one slightly negative thing to say about this 4K UHD combo pack is that there are no new special features for the film. As I mentioned before, 2017 marks the 10th anniversary of the film's release, so I was hoping there might be some new, exclusive content that further sells the Blu-ray owner of 3:10 to Yuma on the merits of trading up. That being said, as I had never seen the film before, the vast amount of special features that are identical to the ones on the current Blu-ray offering were quite impressive.