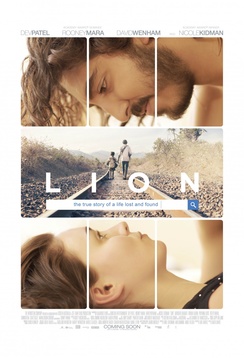 You know, it's funny. When films get nominated, they get applauded by the number of nominations they get, but in the end, if they fail to win any Oscars, those nominations sort of end up swept under the rug.

If you mention the 1977 film The Turning Point to a casual film buff, you probably won't light a bulb of recognition in their heads, but this film was nominated for 11 Oscars. It didn't win a single award and now is just remembered as the film that shares a footnote with The Color Purple. I'm sure you could make a good analogy about winners being the ones that write history, but that doesn't mean that there aren't good stories on the losing side as well.

Lion is one of those films that, despite not taking home a single win from its six nominations, deserves the glory that it got from its Oscar buzz. Although, I fear that in five years or so, we will struggle to remember the film when someone brings it up.

The story is an interesting one that provides a great framework upon which director Garth Davis is able to hang a compelling film. It's a true story about a boy in India who gets separated from his brother in a train depot and boards the wrong train. He wakes up in Calcutta and is unable to understand their local dialect and is unable to find his way back home.

The real thrust of the film follows that boy several years later as a grown man, played brilliantly by Dev Patel, who uses Google Earth to try and track down his long-lost hometown and reconnect with his family. The film proves that the trek is just as important as the destination. Because, while the story is one that would stretch the realm of believability had it not been based on a true story, it's the acting that really seals the deal.

Dev Patel is no stranger to Oscar-caliber films thanks to his debut role in Slumdog Millionaire, but his performance in Lion reflects the personal growth that he has made as an actor that is similar to the growth that his character experiences in the film.

Saroo, the young boy who gets lost, is very fortunate in that he was adopted by an Australian couple and is given a life that most in his predicament could only dream of and yet, he still can't shake his true family. The way that Patel is able to convey these conflicting emotions speaks volumes for his acting chops and he is duly rewarded with a Best Supporting Actor nomination.

The Weinstein Company is known for cherry-picking their awards contenders and while Lion may not have brought home any of the big prizes, it is still an amazing film that deserves to be seen. I hope that the buzz it garnered during the run-up to the Oscars doesn't dissipate too quickly and audiences are able to discover it on home entertainment.

Luckily, Lion is now available on DVD and Blu-ray and you won't be disappointed in the life-affirming message that it delivers.