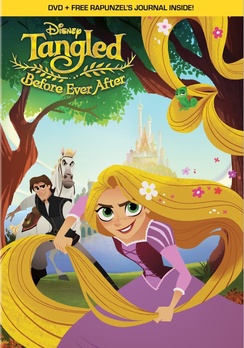 As you are well aware by now, I'm always looking for films that might help me connect with my young children. While they are still probably too young to bond with pops over the latest Kevin Smith film, animated films are the next best thing, right?

Well, it has been an adventure with both ups and downs. I mean honestly, sitting through Storks would qualify as "enhanced interrogation" in many parts of the world. And yet, I was happy to do so for my son last year. I'm stilling waiting for my "Father of the Year" award. It must have gotten lost in the mail. Again.

Anyhow, despite several disappointing setbacks, I'm determined to get my kids excited about films even if that means that I have to watch a plethora of animated drivel. When I brought home Tangled Before Ever After, I was hesitant because while we enjoyed the original Tangled quite a bit, Disney's direct-to-video sequels have been rather hit-and-miss over the years. OK, fine, mostly miss.

But when my daughter's eyes lit up when she saw the package, any trepidation left in me melted away immediately. Sometimes I forget that these films are made for kids and even if I don't enjoy them as much as they do, that doesn't mean that they are pure crap. Well, some are, but I'm happy to report that Tangled Before Ever After is not one of them.

This hour long "film" is really a backdoor pilot to a new animated series on the Disney Channel by the same name. If there's one thing that I have discovered over the last five years of parenthood, it's that Disney has done a pretty amazing job at developing content through their TV channels that augments and widens the reach and scope of the original source material.

With Tangled Before Ever After, this is most definitely true. Not only do the lead voice actors from Tangled, Mandy Moore and Zachary Levi, return but they also surround them with an all-star cast and interesting storytelling that makes the return to this story worth the investment.

While the main voices are the same, there is one pretty big difference between the sequel and the theatrical film and that's the style of animation. It wasn't that much of a big deal for us since we were used to the more traditional 2-D animation that many of Disney's TV series incorporate, but it might be jarring for those expecting the more robust computer-generated animation of the theatrical film.

I noticed it right off, but it quickly faded by the wayside as the story took over and my kids never even mentioned it, but it might elicit some concern from more astute younger viewers that Rapunzel and Eugene don't quite look the same. It's a valid concern and one that might hold some merit if this were a true one-off sequel, but it's pretty evident that they couldn't recreate the same look of the first film on a week-to-week basis as a TV series.

So, given that, it's understandable that they decided to present it all in the more traditional style of animation. And, to be honest, there's an inherent beauty to this style of animation that harkens back to Disney's roots. I see the classic animated Disney films that I grew up on in this new style and it just reaffirms the connection between my kids and I.

One of the best things that Disney has going for it on these TV offerings is that they usually include a memento in the package as a value added element. This might not seem like a big deal to you and me, but for my five-year-old daughter, these tchotchkes can be the highlight of her day and she is often as excited about them as she is the DVD itself.

For Tangled Before Ever After, the added element was a replica of Rapunzel's journal. The joy that journal gave my daughter is worth its weight in gold. To be fair, it doesn't weigh that much, so I might be underselling it a bit, but suffice to say, she loved it and immediately started drawing and writing in it.

When you're a parent, it's often the little things that make all of the difference and for Tangled Before Ever After, this little thing certainly made my daughter happy and, in turn, I was a hero in her eyes. OK, maybe not as much of a hero as Eugene, but I'll take it for now.

Tangled Before Ever After is now available on DVD and the first season is currently playing on Disney Channel, so it's the perfect time to dive right in. We've watched the first few episodes so far and while it was inevitable that the quality would dip a bit as is the case with serial storytelling, so far, it's not very noticeable and it has been a welcome addition to our weekly TV viewing.