Review: True love blossoms in 'The Light Between Oceans' 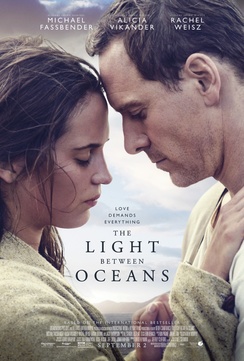 If there's one thing that young writer/director Derek Cianfrance has going for him, he truly knows how to capture spectacular acting performances. Whether it's with his muse Ryan Gosling or eliciting an Oscar-nominated performance from Michelle Williams, the acting in his films are all top notch.

This week's The Light Between Oceans is yet another fine example of how he is able to pull back the fluff and reveal the underlying emotion between characters. I read the book upon which the film was based and to be honest when I heard they were adapting it to the big screen, I was rather unimpressed.

It's not that the story isn't compelling, it's just that the book was rather uneven and predictable. Not only that, but as written in the book, Tom and Isabel weren't exactly compelling characters. In particular Isabel comes off as a bit pretentious and privileged, which makes the trials and tribulations that her character experiences all the more jarring to the reader.

However, Cianfrance and more importantly Alicia Vikander is able to instill a real passion into Isabel that really presents the viewer of the film a different side of the character than you find on the written page of the source material. Likewise, Michael Fassbender also gives Tom a new sense of depth that seems lacking i the novel. In the book, it's easy to dismiss Tom as a one-dimensional character, but in the film there is a subtle nuance that really adds depth to him besides simply being someone who is damaged from all of the violence that he has witnessed during his time in the war.

Perhaps most interestingly though is that after the cameras stopped rolling, life imitated art. The film was shot in 2014 and later that year Alicia and Michael confirmed that they were indeed dating in real life. So, The Light Between Oceans gives the viewer a unique look at the blossoming start of a real love affair and helps to explain the ease of passion that their characters share on screen.

It's not unheard of for co-stars to fall for one another while shooting on set, but Derek Cianfrance almost wills it to happen through his method directing. Like with Ryan Gosling and Michelle Williams on Blue Valentine, he insisted that Alicia and Michael live together while filming. I'm sure that this added element of intimacy not only shows up in the film, but also helps to explain why their relationship is still going strong to this day.

While the plot of the film is simple, an isolated couple having problems getting pregnant are literally given a baby in the form of a rowboat landing on their island, it's the love between Tom and Isabel that lingers once the credits roll. I feel that the film does a great job exploring loss and sacrifice while still staying true to the original source material. And yet, it's the performances from Michael and Alicia that truly make them memorable.

As a sidenote, Derek Cianfrance is really making quite a statement in a relatively small sample size about fatherhood. His film The Place Beyond the Pines overtly tackles the subject, but he is able to weave a bit of fatherly wisdom more subtly in The Light Between Oceans.

There are several scenes such as the birthday gift and others that really highlight the importance of a strong paternal figure in life. It just so happens that Lucy (or Grace) never really is given the opportunity to know her biological father, but the underlying point is that biology is secondary to having that strong fatherly influence in your life, no matter what the relation.

While I wasn't exactly high on this film based on the book upon which it was based, I had faith that Derek Cianfrance could do it justice. I was right. More than that though, he proves that he is able to coax award-caliber performances from even the most unlikely places. Tom and Isabel's haunting story of love and loss will stay with you long after the credits roll.

The Light Between Oceans is new on DVD and Blu-ray this week.