Best movies of 2017 that you don't know about yet: John's list 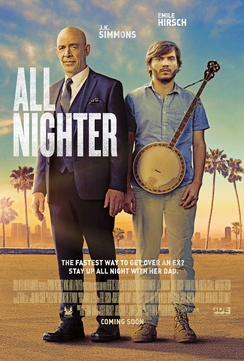 By now, I'm sure that you've met Noah and gotten to know his sleeper picks for this coming year. If not, what are you waiting for?

We continue my favorite week here on the site with my sleeper picks. While Noah decided to focus on mainstream films with breakout potential, I went with smaller, more independent films that we will all be talking about at this time next year.

Think of Green Room (which was on Tim's list last year), Swiss Army Man or The Lobster (on my list last year), films that are a bit off the beaten path, but still very enjoyable. As expected, I tend to get a lot of inspiration from films that debut at Sundance and this year is no different.

I believe that half of my selections are making their debut in the next week in Utah. That's not only a testament to the strong field of films playing Sundance but also how the iconic film festival has become synonymous with quality.

The tricky part though is that many of these films have yet to secure distribution, so there's no guarantee that we will see in 2017 at all. Of course, I hope that I'm picking the cream of the crop films that will be more likely than not to see distribution this year.

Keep your eye out for news coming out of Sundance this week and plan your film watching accordingly. For now, sit back and let me know what you think of my sleeper picks.

I'm not usually one that falls head over heels for romantic comedies, but if there's one actress that can arouse my curiosity, it's Anna Kendrick. She is absolutely one of the most underrated and phenomenal actresses working right now and I will watch anything that she is a part of.

Why it might fail: Remember the mutants from Table 9 from The Wedding Singer?

Well, they were a great one-off joke, but is the world really ready for an entire film based on the misfit table from a wedding? I think so.

Whenever J.K. Simmons is in a film, you already know that it's going to be pretty good. But when you surround him with a great young cast and a story that sort of resembles a comedic take on Taken, then you have the potential for an amazing film.

Why it might fail: Emile Hirsch plays the banjo-playing ex-boyfriend and his performances are either great or terrible. There really doesn't seem to be any middle ground for him.

You know, there has sort of been a bit of a natural rivalry between us and Netflix for many years, but as they have moved into creating their own films and TV series that find their way to physical distribution, I am more tolerant these days. This film opens up in Sundance this week and will debut on Netflix on March 31, but I find it hard to believe that a film that looks this good with this level of a cast won't find its way to theaters at some point.

Why it might fail: It's a love story set against the backdrop of a world that has proven the existence of an afterlife. So, if it performs like Melancholia or Seeking a Friend for the End of the World, then it might end up being D.O.A.

Chris Evans plays the guardian of a gifted young girl (his niece) who becomes the subject of a custody battle when it turns out that others can profit from her brilliance. It has a great supporting cast, but even from the trailer, you can tell that young McKenna Grace is going to be a break-out star.

Why it might fail: Suddenly people realize that Captain America can't act.

Is there anyone whose star is hotter right now than Casey Affleck? Fresh off his Golden Globe-winning performance in Manchester by the Sea, he teams back up with Rooney Mara and writer-director David Lowery from Ain't Them Bodies Saints for this film. It's sort of a more serious take on Ghost where Casey Affleck dies and then haunts his former house and lover. It sold to A24 before Sundance, so that's a great sign.

Why it might fail: The words "serious take on Ghost"...

Aubrey Plaza and Elizabeth Olsen team up in a film? Yes, please!

Why it might fail: In light of the current political environment, a film about a social media star who attracts a stalker might hit a little close to home for some audiences.

This is the type of film that could garner some serious awards consideration for lead Jack Black. It's a true story about a Pennsylvania polka sensation who conned his fans to invest in a Ponzi scheme. Nope, I can't make this stuff up.

Why it might fail: It's about polka dancing, in part, so it could go either way.

This the first film directed by Edgar Wright since he pulled out of Ant-Man, so it's a good bet that he is going to have a chip on his shoulder. It also doesn't hurt that the film sounds pretty awesome. It's a heist film with a star-studded cast, so it's right up his alley.

Why it might fail: Everyone remembers The Italian Job, right?

No, it's not a secret Avengers movie, but Elizabeth Olsen and Jeremy Renner re-team for a film about solving a murder on a Native American reservation. Is there any young filmmaker enjoying a better couple of years than Taylor Sheridan? This film follows Hell or High Water and Sicario.

Why it might fail: The Weinsteins suddenly forget how to market a great film (it's not going to fail).

My list of sleepers wouldn't be complete without a Jennifer Lawrence movie on it, would it? Nope. Here she re-teams with her Hunger Games director to play a sexy (obviously) Russian spy who falls for a CIA officer.

Why it might fail: Again, if relations with Russia thaw under the new political regime, then perhaps the story loses some of its shine. But, probably not.