Review: '31' will fuel your clown nightmares 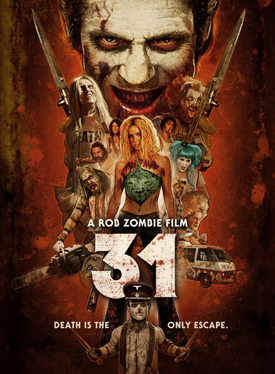 Let's face it, clowns are creepy. Unless you're a toddler (and even then, their entertainment value is questionable), clowns fall more into the camp of Stephen King's It than say, Bozo.

There's just something unholy and unnatural about them. They are so creepy that earlier this year, there was a brief outbreak of evil clown encounters. Whether or not these encounters were true or even part of some odd viral marketing attempt for this very movie 31 is beside the point.

No, the point is that a very real, albeit brief, hysteria was created by the simple notion that clowns were coming out of the woods with evil intentions. So, when I slid this film into the player, these clown sightings were the first thing that jumped into my head.

It seems that evil clowns are enjoying a bit of a renaissance not only in popular culture but also in the cinema as this is the second evil clown film that I have reviewed this year. I rather enjoyed the earlier Clown film, so 31 already had some high expectations facing it.

That being said, I can certainly appreciate talented work when I see it, no matter if it's something that I would normally seek out on my own or not. Just as Kevin Smith is an expert at dick and fart jokes, Rob Zombie is a maestro when it comes to messed up horror films.

I really enjoyed his film The Devil's Rejects and 31 reminds of that film in many ways. I could see the Firefly family playing the game or being the aristocrats. Their natural blood lust would be right at home in 31 and vice versa.

If you're a fan of Rob Zombie, then you're going to see this film. If you're not, but curious what to expect out of 31, think Saw meets Hostel meets The Texas Chainsaw Massacre. There's plenty of mindless brutal violence and enough of a plot to keep even the most ardent critic of the genre engaged while the events resolve themselves.

Overall, it's not Rob Zombie's best work, but it's a very good horror film that is debuting amid the holiday wasteland of horror films. If you're the type of cat who thinks that Silent Night, Deadly Night counts as a Christmas film, then check out 31 to get you through these cold yuletide nights.