Review: 'Green Room' is a mosh pit of wickedness 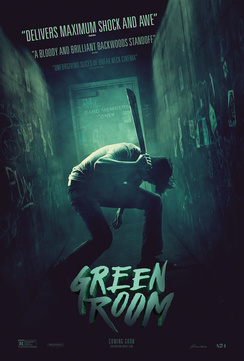 When I heard that Patrick Stewart was going to be a white supremacist in a horror/thriller film, I was befuddled. Flummoxed, actually. Here was one of our living treasures, none other than Captain Picard himself, so why would he debase himself in a silly, low-budget schlock film? And then, I watched Green Room.

To be honest, the first time through, I was less than impressed and didn't immediately see what the big deal was about the film. I had heard glowing things about it, but after my first watch, I still didn't get it. Thankfully, I watched it again to prepare for this review and it was like seeing a completely different film.

I think that Green Room is one of those films that actually gets better with repeat viewings. I think that multiple viewings allow you to appreciate the nuance in the performances. What I simply dismissed as another "escape room film," my term for the rash of Saw-like films in which the protagonists need to extricate themselves from a deadly situation, is really a critique on fear and the use of hate to further a selfish agenda.

The social ramifications to the world we see outside of our windows can't be understated. We only have to look as far as this year's presidential election to see how hate and fear are being co-opted and turned into rhetoric. In Green Room, that hatred and fear take the form of Patrick Stewart's Darcy and Macon Blair's Gabe.

As the ones in charge of the white supremacist bar, they are ultimately responsible, both directly and indirectly, for the events that transpire in the film. They breed hate and that evil is personified in the film by every one of their lackeys who try and eradicate the issue at hand.

As you can see, it's hard to review this film without properly spoiling it, but I will give it my best shot. For this is a film that you don't want to be spoiled on before you watch it. There are so many moments that will haunt you long after you finish the film, so I will do my best to preserve those for you, but to still give a proper review of the film.

The plot centers around a punk band that ends up playing in a white supremacist bar after their tour goes off the rails. Cut off from the rest of the world, this isolation helps to drive the story when they are basically imprisoned in a Green Room after the gig.

From there, the band has to survive by any means necessary. Think of From Dusk to Dawn or Feast without the monsters. Or rather, with white supremacists standing in as the monsters they truly are. 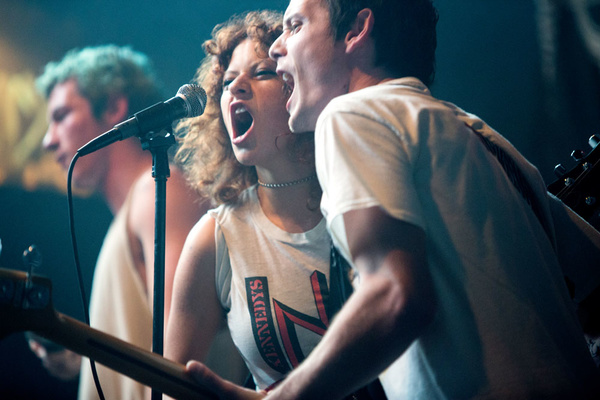 At the heart of the film though is a band and it's revealed in the featurette on the Blu-ray "Into the Pit" that the cast actually learned to play the instruments and songs for the film. So, in essence, they became a real band and even played at the wrap party. This cohesion is evident as things go south quickly and the cast is able to project a real band vibe that lends itself to the authenticity of the film. As a fan of punk rock bands, I could easily see The Ain't Rights playing in some dive bar.

You would expect Patrick Stewart to own the film when he's onscreen (and he does), but what you don't expect is the spectacular performance turned in by Imogen Poots. In addition to having one of the best names that I have heard in a long time, she really blossoms in this role and is able to display true acting chops that many of her peers struggle with at times.

I'll be honest, I haven't seen much that Imogen has been in, but that's going to change. If her other performances are as striking as this one, then I think we have a true superstar ready to break out big time.

The other amazing performance in the film belongs to the criminally underrated Anton Yelchin. As opposed to Imogen, I had been following Anton's career for a long time. He was always able to breathe a unique perspective into any character. Heck, he even made Chekov into more than a one-joke lackey in the latest batch of Star Trek films.

Green Room will sadly be remembered as one of Anton Yelchin's last films. The young actor was tragically killed in a horrific accident last month and it is this film and his performance that fills me with sadness that with his death we were robbed of some truly great performances.

It's always hard to come to grips with a young actor's demise and the films that are released after he has died. I do think there is a tendency to see those films as being something more than they truly are, but this is not the case with Green Room.

I think the film truly stands on its own in this genre and perhaps Anton's tragedy will result in more people seeing the film than would have otherwise. In this respect, Green Room truly is a fitting tribute to an actor who constantly lost himself in his craft and left us way too soon.

Rest in peace Anton, you will be truly missed.