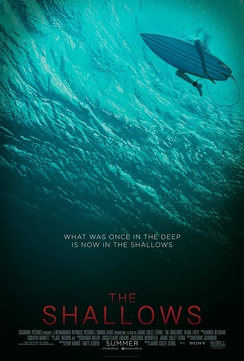 I really don't understand our society's obsession with sharks. I mean, I get it. Ever since Jaws debuted (41 years ago last week), the once benign ocean-dwelling beasts were raised to mythic proportions.

Now, thanks to Steven Spielberg, sharks were sworn enemies of humanity intent on fulfilling their blood lust through any means at their disposal. And for those us that have suffered through Jaws 3 and Jaws: The Revenge can attest, every conceivable mean (and several that shall never be talked about again) has been tried.

But, do we really need an entire week of television devoted to them? I mean really, are we truly learning so much about them year-to-year that we need to spend an entire week each June on sharks? Apparently so, because Shark Week is a cultural phenomenon and I blame it for the never-ending barrage of Sharknado films.

So, it's on the cusp of this annual ritual that Sony Pictures decided to release their woman vs. shark thriller The Shallows. I would argue that it was the decision that the studio has made in several years.

Before we get to the feeding frenzy, there's a little appetizer that we need to talk about that is anything but little. But good news, it also has sharks. Well, at least one named Destiny, but since I haven't yet seen Finding Dory, I can only confirm the existence of one whale shark.

Being that it's Pixar, the whale shark isn't as menacing as, say, the great white in The Shallows, but it helps to fill the Shark Week Mixer quota. Destiny and company continued to pad Disney's bank accounts to the tune of a massive $73.2 million second weekend. So far, the sequel has hauled in a ridiculous $286 million through two weeks and it should only continue to amass a fortune until The Secret Life of Pets opens in a couple of weeks.

As it stands, there's a more than decent chance that Finding Dory will break the $400 million barrier by the end of next weekend's Independence Day holiday. It's a stretch, but I think a decent run through July could propel Finding Dory past Shrek 2's $442 million record for highest-grossing animated film of all time.

At this rate, the film will struggle to get past $150, but with a nice holiday boost this weekend, I could see it finish around $175 million as the ceiling. While that is a far cry from a home run, I'm sure Fox would be quite happy with that number.

But this is Shark Week, not Alien Week, so let's get to the sharks, shall we? Opening in fourth place The Shallows earned on the high side of expectations with a nice $16.7 million payday. Given the low production costs of the film, Sony has to be ecstatic for its performance and the stellar word of mouth that it is getting should help to insure that the film will finish with around $75 million in its coffers.

The other wide release this weekend, Free State of Jones, failed to earn its independence with a paltry $7.8 million in receipts. The Matthew McConaughey-starrer was aiming for about double that number and will now struggle to finish with $25 million. I guess I'm left shaking my head over the timing of this release. It just seems that this is a film that would have performed better in a quieter part of the year, say awards season. Oh well, they can't all be winners, eh?

But Phil, he does more than simply visit the locations. He tries to recreate the shot.

What I like is seeing how the locations have changed over the years. Then you start to think how we immortalize them and keep them locked into the same time and place as when the films were made and you really start to get a sense of time and age. Plus, they're really cool.