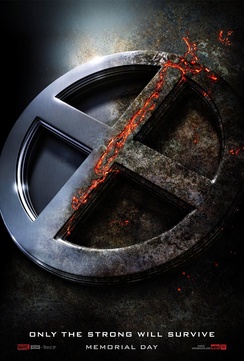 I know. I know. You're probably getting sick and tired of hearing me rant and rave about the lack of magic and mystique in movie trailers this day, but what can I say, I'm just telling it like it is.

If you fall in that camp, simply jump to the bottom and watch the first trailer for X-Men: Apocalypse and let me know what you think. For everyone else, I'm happy to report that there is Mystique in this trailer - sort of.

Mystique, played in the last two films by Jennifer Lawrence, takes center stage in this trailer. At least, I think it's Mystique. It's hard to tell because it's painfully obvious that Fox is trying to cash in on JLaw's fame by altering her character's backstory and appearance. Yes, Mystique can change her appearance to anything, but more often than not, it's the blue-skinned visage that comic fans associate with the character.

There's only one problem, JLaw in blue-face doesn't sell as many tickets as JLaw from what could easily be outtakes from the latest Hunger Games film. Or perhaps JLaw doesn't want to spend so much time in a makeup chair. Whatever the case, it's pretty apparent that Fox is pinning the hopes of this film on JLaw and not the other missing ingredient.

It shouldn't be surprising that Hugh Jackman doesn't appear in the trailer as the actor and studio have both come out in support of reining in Wolverine a bit. But, we do know that Jackman was involved in reshoots for the film so his character does make an appearance of some sort. I think it's safe to say that from this trailer, it's only going to be a cameo which is fine, but he certainly added a nice piece to X-Men: Days of Future Past.

Finally, the last thing that is missing is really any sort of urgency. Yeah sure, the world is supposed to be ending according to a dream from Jean Grey, but we've been down this road before and let's face it, Fox would be shooting themselves in the foot with their franchise if they simply ended the continuity that ends (starts?) with the original X-Men.