Things get big in 'BFG' trailer 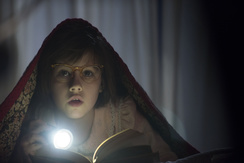 The next film from Steven Spielberg is probably as under the radar as any film from him can possibly get. Believe it or not, he returns with a family film next Summer based on a beloved classic children's book and there's been very little fanfare to date. Of course, The BFG doesn't open in theaters for another seven months, but this is a Steven Spielberg film that we're talking about.

The first trailer for The BFG quietly debuted this week and while the reaction has been mostly positive, it barely made a ripple on the ocean that is Hollywood. Sure, some of that might be the obsession that we are all experiencing with that little Star Wars film, but what if this signals a shift in Hollywood?

It's been four years since Spielberg released a family film and the response to The Adventures of Tintin was mixed at best. It's true that the director has been moving towards more adult fare in the last couple of decades, but you'd have to go all the way back to Hook or Jurassic Park to find his last true family hit.

Has the genre passed him up? Can he still create the magic that he expertly wielded in films such as E.T. and the Indiana Jones series? From our first glance, I think everything will be fine for Steven Spielberg. In fact, the trailer has a real Harry Potter feel to it, which should resonate well with a generation of fans that grew up on the series.